Hima Das gets ready for World U20 Championships in Finland 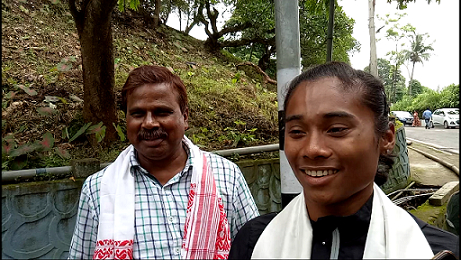 Athlete Hima Das will leave for Finland on July 7 to participate in the World Under-20 Championships in Athletics, also known as World Junior Championship, scheduled to be held from July 10 to 15, 2018 at Tampere.

Informing this after being felicitated by Assam Governor Jagdish Mukhi, Das also told media persons here on Monday that she would also participate in the Asian Games 2018, which is scheduled to be held at Jakarta in Indonesia from August 18 to September 2, 2018.

Assam Governor Mukhi on Monday felicitated athlete Das at the Raj Bhavan in Guwahati for her laudable performance in the 58th National Inter State Senior Athletics Championship held recently in the city.

Expressing her happiness, Das said, “I am very happy today as along with me the Assam Governor also felicitated my coaches Nipon Das and Nabajit Malakar. They have played an important role in my career.”

“Since I started my career practising at Indira Gandhi Sports Complex, Sarusajai here, I feel proud that I could win gold in the 200 metre and 400 metre races at the home ground,” Das said.

It may be mentioned that Das completed the women’s 400 metre race in Guwahati in 51.13 seconds.

Talking to media persons, Hima Das informed that she would leave for Finland on July 7 to take part in the World Under-20 Championships in Athletics, which is known as World Junior Championship, scheduled to be held from July 10 to 15, 2018 at Tampere in Finland.

Das said, “I have started practising hard to win medals in World U20 Championship and Asian Games.”

Appealing to the budding players of the State, Das said, “The State has been plagued with various issues for a long time. So, the players should come out on their own to gain success in their respective fields.”