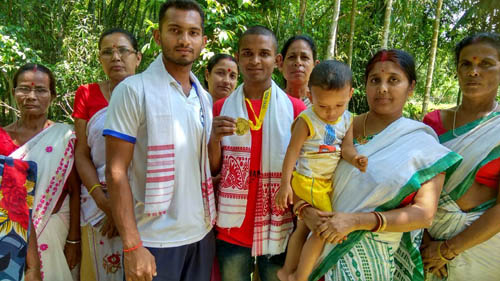 Rupjyoti defeated a Kashmiri opponent in the final in 48-52 kg category in the championship.

The championship was organized by Sports Karate Association of India from May 25-28.

Nagaon’s Jagrat Mahila Mancha president Janmoni Gayan and some members arrived at Rupjyoti’s house on Wednesday and felicitated him for bringing laurels to the district by achieving this feat.

His parents are Rabiram Saikia and Reena Saikia.

Rupjyoti also bagged gold at the 1st North East AKHADA Festival under Assam Kung-Fu and Kick Boxing Association which was hosted by ASH-TE-DO, Assam at Simaluguri in Sivsagar district in 2015.

He participated in the competition in the 44 kg weight category.

Rupjyoti will participate in the World Karate Championship to be held at Kolkata’s Eden Garden Stadium in December this year.

A team of 10 players led by coach Biplab Kumar Saikia participated in the national-level competition in Digha.