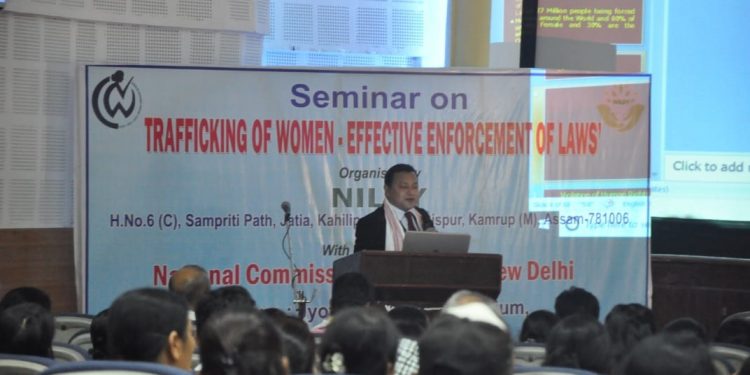 The seminar in progress.

The seminar was organised by Niloy, an NGO, and was supported by the National Commission of Women, New Delhi.

The seminar discussed ways and means to curb human trafficking which was proving to be a huge menace in the society with young girls getting caught in the “trafficking vortex”.

The keynote address was delivered by retired police official Pallab Bhattacharjee who also inaugurated the seminar.

He explained that human trafficking is an “organised crime which is beyond national and state boundaries”.

He dwelt at length on how to go about cracking a human trafficking case and what were the hurdles which the cops faced.

Santanu Kumar Sarkar, advocate, Gauhati High Court, was one of the resource persons at the seminar.

Sarkar talked about the various laws which were in place to deal with human trafficking and how self-help groups (SHGs) could help in solving the trafficking cases.

More than 150 people attended the seminar. The seminar concluded with the valedictory speech given by Rajendra Nath Khound, president, Niloy.