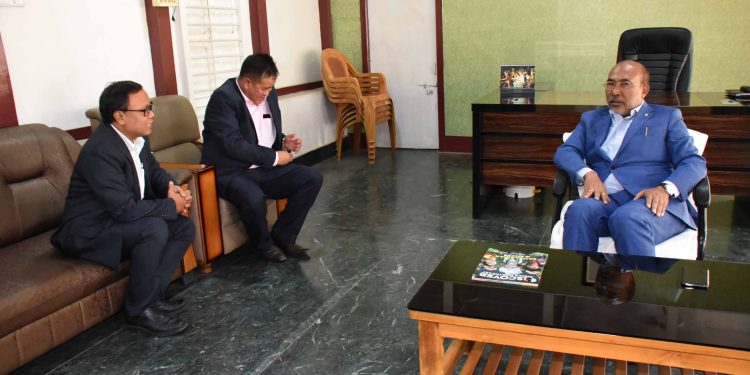 A four-member team of Mizzima Media Group that has come for the Sangai festival, Myanmar led by its editor-in-chief Soe Myint met Manipur Chief Minister Nongthombam Biren Singh at the Chief Minister’s secretariat located in the heart of Imphal.

The media team is on a trip to the State to cover the 10-day Manipur Sangai Festival, 2018 which began from Wednesday evening at five different locations withe Hafta Kangjeibung in Imphal East district as the main venue.

The festival has been organized to promote Manipur as a world class tourism destination besides showcasing the uniqueness of the State’s picturesque beauties including shy and gentle brow-antlered deer Sangai found in wild only at the floating Keibul Lamjao National Park in Loktak Lake under Bishnupur district.

The team will stay till November 27. The Chief Minister will host a dinner to honour the visiting Myanmar delegates including the Chief Ministers of different States of the neighbouring country in Imphal on November 26.

On Tuesday, around 100 delegates from Myanmar arrived at Imphal through land route via Moreh, the border commercial town of Manipur located opposite to Myanmar’s Tamu township, to participate and witness the grand event of the region.

Interestingly participation of the Princess of Thailand, Ambassador of United States of America with other foreign dignitaries, traders and cultural troupes in the festival this year will make it grander in scale and style.