A video clip of the incident showing a mob beating up the doctor had gone viral on social media, which helped the cops in identifying the culprits 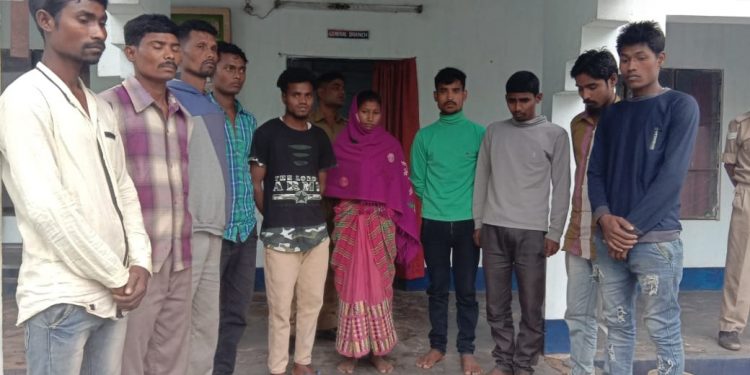 Dibrugarh police on Monday arrested five more people in connection with the brutal attack on a doctor in Dikom Tea Estate here taking the total number of arrested persons to 22.

According to police, earlier 17 people involved in the incident were arrested by the police and hunt was on to nab the rest of the culprits.

A video clip of the incident showing a mob beating up the doctor had gone viral on social media, which helped the cops in identifying the culprits.

“So far 22 persons involved in the incident have been arrested. We have identified all the culprits through a video footage of the incident. There will be a couple of more arrests. We are taking the matter very seriously,” said a police official.

He said the accused persons have been booked under sections 143 (unlawful assembly), 147 (rioting), 325 (voluntarily causing grievous hurt), 427 (mischief causing damage), 506 (criminal intimidation) and 307 (attempt to murder) of the IPC.

Meanwhile, the garden management lifted the indefinite lock-out in the tea estate from Monday morning. The lock-out was imposed following the incident on May 6 fearing further deterioration of the situation.

“On Sunday we had a meeting with delegates of the ACMS (Assam Chah Mazdoor Sangha) and ATTSA (Assam Tea Tribes Students’ Association). They have assured us that there will be no repetition of such incident. The workers have also expressed regret and apologised for the incident. Following the assurance we have decided to withdraw the lock-out from Monday morning,” Samar Jyoti Chaliha, the manager of Dikom Tea Estate, said.

He said someone people of the nearby area instigated the workers of the tea estate.

“Resident non-workers are the problem in the tea estate. Police is investigating the matter and they will soon land on cops net” he said.

On May 6, Probin Chandra Thakur, the medical officer of Dikom Tea Estate, who has been serving in the tea garden for 30 years, was brutally manhandled by a mob of garden workers following the death of a woman worker during a severe thunderstorm.

The worker, identified as Jhalo Surjan, was crushed to death while plucking tea leaves when a tree uprooted and fell on her. Three co-workers – Mangri Keot, Manik Murah and Mamta Murah – also suffered injuries in the incident. Alleging lapse by the management in despatching an ambulance, irate workers manhandled the doctor.

A pharmacist and a manager of the tea estate were also injured while trying to rescue the doctor. The doctor who was later saved by the police had to be admitted to a private hospital with a broken collar bone and several fractured ribs.

The incident had evoked strong reactions from the doctors’ fraternity with members of the Indian Medical Association (IMA) Assam State Branch members staging an hour-long protest across the state on May 11.

“We are happy that the garden management has lifted the lockout because if the lockout continues for an indefinite period then the poor workers will suffer,” said an ATTSA leader.

The garden management had announced Rs 1 lakh compensation for the next kin of the deceased.

Chabua MLA Binod Hazarika on Wednesday handed over a cheque of Rs 4 lakh to the family of the deceased as compensation.

After the incident, a peace committee was formed and a meeting was held under the aegis of ATTSA and Assam ACMS on Tuesday.

The meeting demanded that the garden management should lift the lock out immediately which was imposed by the manager of the garden in anticipation of further breakdown of law and order.