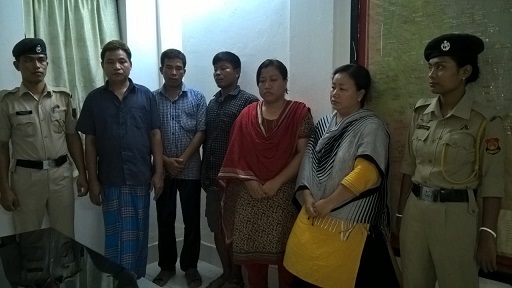 In a major breakthrough, the Gandachera police on Thursday nabbed five Bangladeshis (three men and two women) who entered Tripura illegally without any document.

Acting on a tip off the Gandacherra police conducted sudden raid in the house of one Bimal Chakma and arrested the five Bangladeshis from there.

It is to be mentioned here that the arrested Bangladeshis entered Tripura via Chaplingchara border area on August 10 located between Roshiyabari PS and Jotonbari PS.  Later they started staying at Pecharthal in one of their relatives’ house and then went to the house of one Bimal Chakma from where they were arrested.

Though police arrested the Bangladeshi residents but Bimal Chakma who had given shelter to them managed to give police a slip. Police further recovered Bangaldeshi currencies worth Rs 56,750 from their possession. A case has been filed against the Bangladeshi nationals.

Questions are being raised on the role of the DIB and 71st BSF Battalion patrolling the Chalplingchara border through which the Bangladeshi resident intruded into Indian Territory.  The Bangladeshis have been staying here since 10th of August but the DIB team was totally unaware of their presence.