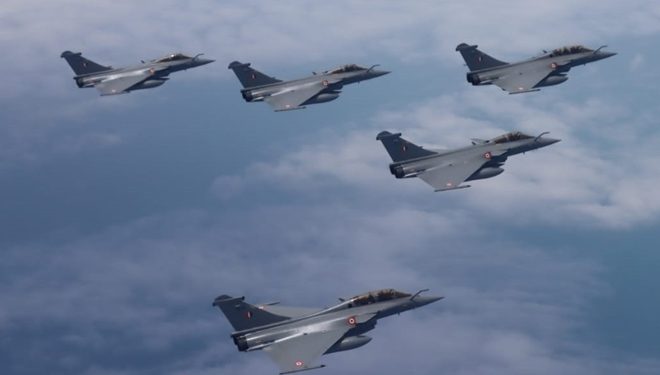 The first batch of the five Rafale fighter aircraft landed at the Ambala airbase in Haryana on Wednesday afternoon.

The jets took off from France on Monday after covering a distance of 7,000 km with air-to-air refuelling and a single stop in the United Arab Emirates (UAE).

The fleet landed at Al Dhafra airbase in the UAE after flying for over seven hours before arriving at the Ambala airbase on Wednesday.

The jets will be officially inducted into the IAF as a part of its No. 17 Squadron, also known as the “Golden Arrows”.

The fleet which comprises of three single-seater and two twin-seater aircraft was escorted by two SU30 MKIs as they entered Indian airspace.

A formal induction ceremony of the Rafale fighter aircraft is expected to be held later next month.

As the first batch of five Medium Multi-Role Combat Aircraft (MMRCA) Rafale jets landed in Ambala airbase today, Defence minister Rajnath Singh in a series of tweets welcomed these by saying, “The Birds have entered the Indian airspace… Happy Landing in Ambala!”

“I am sure that 17 Squadron, the Golden Arrows, will continue to live up to their motto of ‘UdayamAjasram’. I am extremely happy that IAF’s combat capability has got a timely boost,” he added

“The touch down of Rafale combat aircraft in India marks the beginning of a new era in our Military History. These multirole aircraft will revolutionise the capabilities of the IAF,” he added.

Highlighting the capabilities of the aircraft, Rajnath Singh said that it  has very good flying performance and its weapons, radar and other sensors and electronic warfare capabilities are amongst the best in the world

He thanked the French Government, Dassault Aviation and other French companies for ensuring the timely delivery of the aircraft and its weapons, despite the severe restrictions posed by COVID pandemic.