Arunachal is like an enormous ocean with vast unexplored and unknown areas that need to be made known to the outside world through research: Chowna Mein 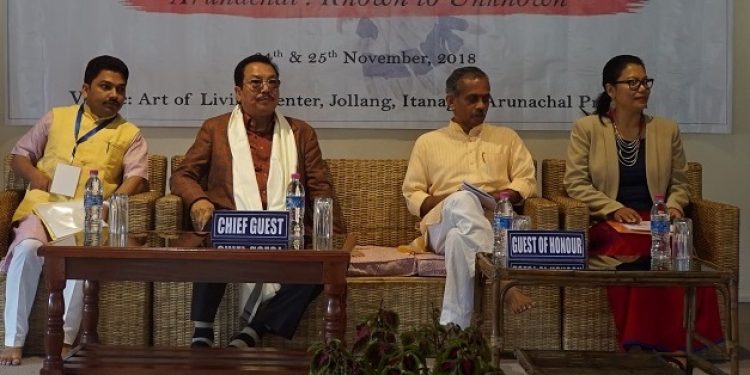 In his address, Mein said that Arunachal is like an enormous ocean with vast unexplored and unknown areas that need to be made known to the outside world through research or survey.

He said that the objective of the national symposium is to know Arunachal Pradesh from the indigenous perspective and to develop intellectual knowledge for creating indigenous narratives through discussions.

“We must take advantage of such opportunity and explore and exploit our potentials, be it in the form of natural resources, hydropower, bio-diversity or forest products and through tourism to propel the state to new heights of development,” he said.

Citing the example of German research scholar, Dr Gerhard Heller’s work on ‘Audio-Visual Documentation of Cultural Heritage of Mishmi Tribes of Arunachal Pradesh’, especially on the indigenous healing practice of Idu Mishmi tribe, Mein said that Arunachal is a hotbed for research scholars for it is here that many research scholars come to document and research their works.

“Today there is a lot of scope for our youths to carry out research work as our State is the melting pot of various languages, tribes, cultures and traditional belief,” he said.

He called upon all to take the responsibility of encouraging the youths for the preservation and protection of the rich traditional cultural heritage and language of the State.

The DCM sought feedback from the literary society, scientist and research scholars for incorporating in the next State Budget.

“Arunachal has been an integral part of Bharat Varsha since time memorial and finds mention in ancient texts,” said Pragya Pravah’s National Convenor J. Nandakumar, adding that the Britishers planted the binary of “tribal versus non-tribal” as part of its larger design of “divide and rule”.

He underlined the need to unshackle the past designs of the Britishers to “civilise the tribals”.

“How could the British even think of civilising the people of the oldest civilisation? Arunachal has been part of the Indian civilisation,” Nandkumar asked.

The DCM later took part in the plenary session on ‘Cultural Ethos of Arunachal’ chaired by RGU Registrar Tomo Riba. The key speakers were Dai and Panging.