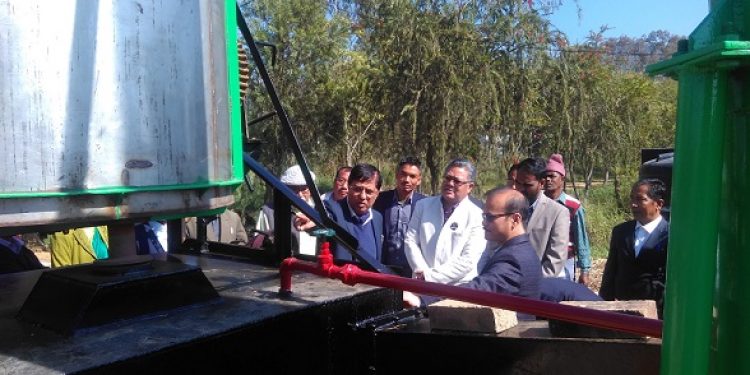 Speaking on the occasion, Minister Shyam said the time has come for the interest individuals in the State to take up the right initiatives as the Government is ready to provide land resources as well as necessary funding under start-up programmes if they’ve proper proposals and roadmaps for their respective projects.

At the same time, scientists are here to transfer the technologies for them. So proper and judicious use of land resources for carrying out economic activities in public interest is the need of the hour, he felt.

Lauding CSIR-NEIST for rendering maximum contribution for the masses in the region, he also appealed the youths of Manipur to engage in entrepreneurial ventures like start-ups not only for their own survival but also for the overall economic growth of Manipur.

He also announced that inauguration of similar projects at Jiribam, Chandram Sandrock, Kangpokpi, Heirok, Wangjing are in the pipeline.

In his power-point presentation on the topic ‘Doubling of Farmers’ Income’, Chief scientist Dr P Sengupta highlighted the advantages of citronella and lemon grass cultivation in Manipur for commercial industrial purposes.

On the other hand, Principal scientist Dr Birkumar said that the youths of Manipur can transform the State into a prospective business market in the country by properly and effectively utilising its gifted natural resources. Around Rs 10 lakh were invested for the installation of Essential Oil Distillation Plant.