As many as eight cadres belonging to proscribed Garo National Liberation Army (GNLA) laid down arms on Sunday at Williamnagar in East Garo Hills district of Meghalaya.

The militants of the banned outfit surrendered to local church leader Rev ST Sangma 15 days after the security forces gunned down Sohan D Shira, the commander-in-chief of the outfit. 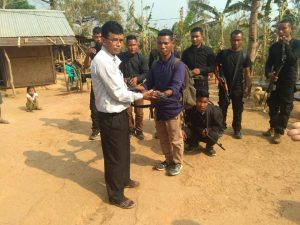 Shira was shot dead on February 24 by Meghalaya police commandos in an encounter at Achakpek near Dobu in East Garo Hills district.

East Garo Hills Superintendent of Police Ringrang Momin said that the cadres got in touch with the police for the surrender. He said that the official surrender ceremony would be held at Police Headquarters in Shillong tomorrow.

The armed militants had been with Shira during the police encounter at Bawalgre but managed to escape. The group had 2 AK-56, INSAS rifle, SMG, .22 air rifle and .22 pistol besides a huge cache of ammunition.

Following the death of the GNLA chief, the rebels of the banned outfit have been in total disarray, sources said. The sustained police operations compelled the remaining rebels to give up arms.

However, ULFA’s deputy commander in chief and IED expert Dristi Rajkhowa was not part of the eight member surrendered group.