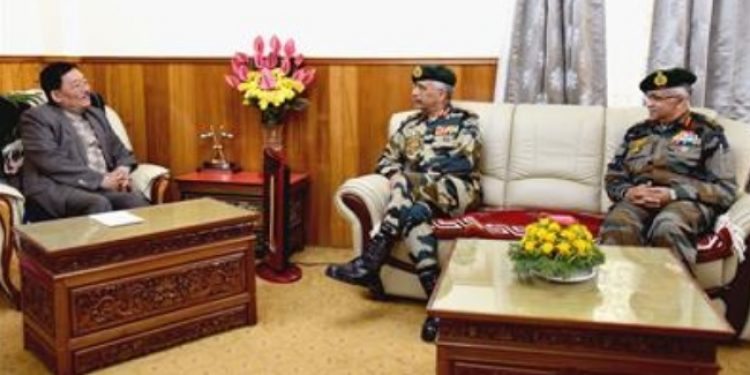 This was the first meeting of the GOC with the Chief Minister since he took over as the General Officer Commanding-in-Chief of the Eastern command on October 1, last year.

After exchanging pleasantries, Chief Minister Pawan Chamling thanked the GOC for his visit to Sikkim. He said the state government has had a very cordial relation with the Army and there is no civil-military tussle of any kind.

He also recorded his appreciation for the consistent help provided by the Army to the civilian population and tourists during times of distress, natural calamities or adverse weather conditions.

The GOC also expressed gratitude to the Chief Minister for providing support to the Army at all times. He lauded the environmental initiatives of the state and the emphasis laid on sanitation.

He said the Army would lend every possible support to facilitate free movement of tourists and visitors within permissible limits.

In the end, the GOC extended his invitation to the Chief Minister to visit the Eastern command headquarters in Kolkata. The GOC was accompanied by senior officers of the Eastern Command.

The Army commander accompanied by the GOC, Trishakti Corps also visited forward areas, where he interacted with the troops and was briefed on security situation along the border.

The general complimented the soldiers for their professionalism, dedication and commitment to maintain round the clock vigil in inhospitable terrain and adverse climatic conditions.