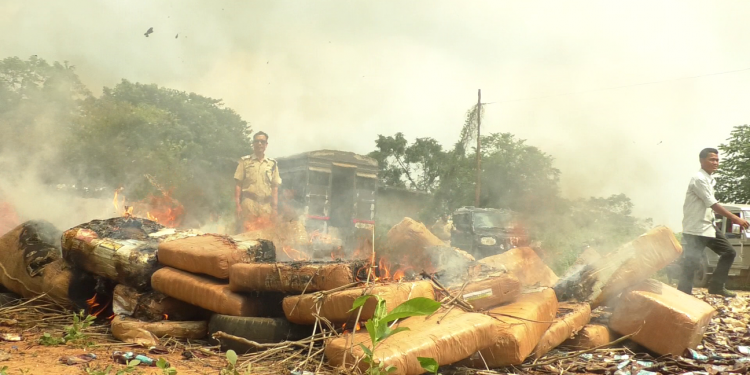 This was revealed by a senior police official at RK Nagar in West Tripura.

“Destruction of seized drugs is going on as per the guidelines laid down by the Supreme Court of India and the quantity of drugs in different forms destroyed are as follows – ganja 6,539 kgs, cough syrup 37,758 bottles, Yuba and other tablets 64,215, heroin around 360 grams,” said L Darlong, DIG, Intelligence.

“As per the present market value, the destroyed drugs would cost around Rs 5 crore,” added Darlong.

The destroyed drugs were seized in a period of one-and-a-half months, said Darlong.

“This is a routine process and we destroy this much of drugs every month,” the DIG further informed.

While the dry ganja, tablets and heroin were burned, the bottles of cough syrup were smashed with the help of a water tanker.

Two months back, ganja, contraband and drugs worth Rs 7 crore were destroyed by Tripura police at the same spot.

More than 70,000 kg of ganja have been seized by Tripura police with the help of security forces during the last one year in Tripura as the new government has launched a ‘Nasha Mukt Abhiyan’.