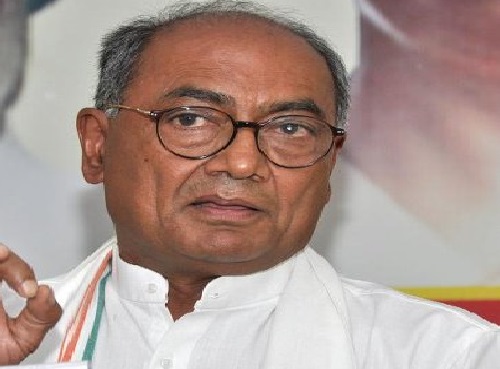 Congress leader and former MP chief minister Digvijay Singh’s purported statement that his party will have a “relook” at Article 370 revocation and Jammu and Kashmir’s lost statehood if it returns to power, has sparked a row.

“The decision of revoking Article 370 and reducing the statehood of J&K is extremely, I would say, sad decision, and the Congress party would certainly have a relook on the issue,” Singh said, according to excerpts of the clubhouse conversation available on social media.

The BJP accused him of speaking “the language of Pakistan” and spewing venom against India.

BJP spokesperson Sambit Patra cited old comments of other Congress leaders, including Rahul Gandhi and Mani Shankar Aiyar, to allege that Singh”s remarks were part of a larger pattern of the party being “hand in glove” with Pakistan.

“The script was originally written by Gandhis and directed from Pakistan,” lashed out Jammu and Kashmir BJP president Ravinder Raina.

Raina said that the BJP will not allow the Congress leaders’ “conspiracy” against India to succeed even if they take “100 rebirths”.

As the BJP attacked him, Singh posted a tweet in Hindi in an apparent jibe at the ruling party.

“This bunch of illiterate people cannot probably differentiate between ”shall” and ”consider”, Singh said.

When asked about Singh”s remarks, Congress spokesperson Pawan Khera said, “The Congress Party has clearly stated its position on Jammu and Kashmir, in its resolution of August 6, 2019 of the Congress Working Committee. This is the only official stance of the party. I urge and request all senior leaders to refer to the same.”

The Congress had, at that time, criticised the manner in which Article 370 was abrogated and J-K was split into two Union territories, saying it “pledges to stand with the people of Jammu, Kashmir and Ladakh and to fight the BJP and its divisive agenda”.