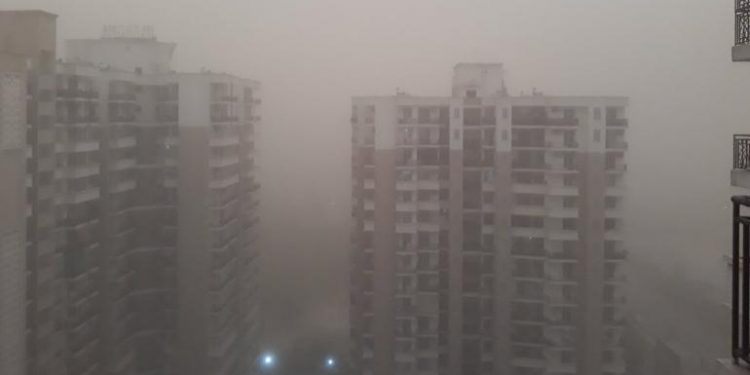 Several flights from Guwahati and other cities in the northeast on Wednesday evening were caught in a whirlpool of dust storm at Delhi’s Indira Gandhi International Airport.

According to reports, flight landing and take-offs were halted for an hour at Delhi and some flights were also diverted to other airports.

The air passengers from northeast who later landed in Delhi felt comfortable as the dust storm brought down the temperature rapidly. Temperature dropped by seven degrees within a period of half an hour.

Temperature in New Delhi had touched 48 degrees on Monday, the highest-ever recorded in June.

“We were expecting Delhi to be hot. It is much better today,” Rakesh Das, a resident of Guwahati told Northeast Now after landing in Indira Gandhi International Airport.

Das said, “Since it has been raining regularly in the northeast, we actually did not feel the heat which the rest of India has been facing during the last few days. Fortunately, Delhi is cool today.”

Met experts are also of the opinion that the impact of Cyclone Vayu, which is due to hit the Gujarat coastline on Thursday, could play a role in keeping the entire NCR cool.

They said since Delhi generally gets affected by the western disturbances, Cyclone Vayu will definitely have an impact on the weather conditions.