Congress reaches out to Hiren Gohain-led Forum against Citizenship Bill 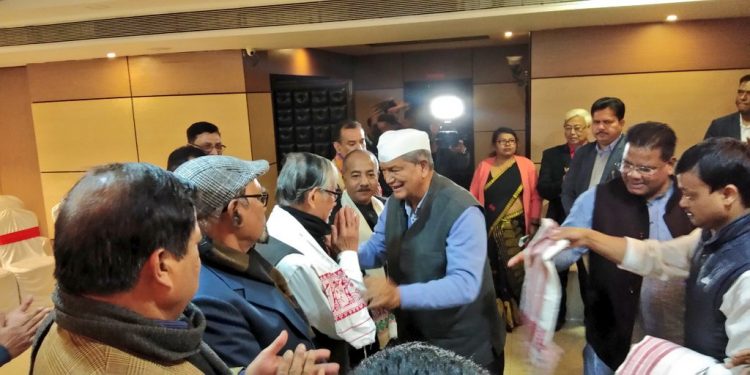 The Congress on Saturday reached out to the Forum Against Citizenship Act Amendment Bill, led by noted intellectual Dr Hiren Gohain.

Apart from Dr Hiren Gohain, the meeting was also attended by other members of the Forum like Haidar Hussain, Santanu Borthakur, convenor Manjit Mahanta and Amar Asom editor Prasanta Rajguru.

Earlier on Friday, the Congress had a two-hour long meeting with the Krishak Mukti Sangram Samiti (KMSS) and 69 other organizations where it apprised of its stand against the Citizenship (Amendment) Bill, 2016.

During the meeting on Friday, the Congress also reportedly revealed before the leaders of 70 organisations how it planned to tackle the issue when it comes up in the Rajya Sabha during the budget session.

The budget session of the Parliament will start from January 31, 2019.

The BJP-led NDA government at the Centre will try to get the Bill passed in the Rajya Sabha where it has no majority.

The move of the BJP in Rajya Sabha can be derailed by the Congress and other non-NDA parties.

The report quoted Manjit Mahanta, convenor of the Forum as saying: “The meeting was on the Bill and what will be their role in the Rajya Sabha. They (Congress) wanted to meet us.”

The Krishak Mukti Sangram Samiti (KMSS) on Friday sought to meet the Congress leaders and wanted the party’s support in opposing the Bill in the Rajya Sabha.

Had very fruitful discussion with KMSS leader Akhil Gogoi and other 70 organisation on Citizenship Amendment Bill. Apart from me @harishrawatcmuk GS AICC, @tarun_gogoi, many Senior Leaders and team of APCC participated in this discussion. pic.twitter.com/aukyWm4C7q

They also wanted a meeting with Congress president Rahul Gandhi.

CLP leader Debabrata Saikia, who had attended Friday’s meeting, said: “We conveyed to them (70 organisations) that our AICC in-charge (Harish Rawat) represented the high command and our stand will remain anti-Bill in and outside Parliament.”