With a handful of saffron bigwigs openly letting loose a tirade of venomous verbal attacks against Muslims of Assam, a game-plan is at work to rake up communal disturbance on a big scale 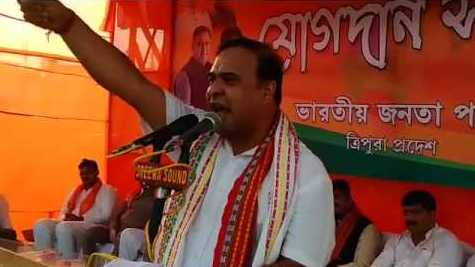 Within a few days of his taking the reins of the Government at the Centre, Prime Minister Narendra Modi caused a virtual quake of sorts with his grand promise of the advent of ‘Aacche Din’ for the nation. Since then about 130 crore Indians have been waiting for the arrival of better days in their lives as promised by the Prime Minister.

The enthusiasm for the beginning of an era of ‘Aacche Din’ was extremely high among the people of Assam. The reason is not far to seek. Having been at the receiving end of exploitation and negligence at the hands of the Centre for decades together, be it pertaining to the setting up of a refinery at Barauni (in Bihar) with crude oil pumped from the oil fields of Assam, or the infamous statement of Pandit Nehru “my heart goes to the people of Assam” when the Chinese were knocking at the doors of Tezpur after over-running Arunachal Pradesh (then NEFA) and the Indian Army taking to its heels for dear life or almost total stagnation in the arena of economic development and nil  industrialization and the like, the towering promise made by PM Modi had a sweeping effect on the psyche of the people of Assam.

The result being that, banking on the high-voltage rhetoric doled out by the PM and other BJP heavyweights,  the people voted overwhelmingly for the BJP in the 2016 polls hoping for the advent of ‘Aacche Din’  to their lives even if it be belatedly.

Presently, the five-year term of the Modi-led Government is at its fag end while the Sonowal-led Assam Government has completed over two-and-a-half years. Leave alone any ‘Aacche Din’, even a semblance of real development at the ground level is apparently nowhere to be seen in the Assam. To be more precise, development in the State has been virtually been reduced to a mirage – an indication of the miserable failure of the Sonowal Government on the development front.

The national scenario is not different in any way. Media reports indicate that after years of lull, there could be an increase in the flow of youths to presumably join militant groups like the ULFA in the recent past. If there be any truth in such reports, it could very well be the outcome of burgeoning unemployment.  Perhaps no government needs to be told that the one of the best ways of countering militancy is through initiation of positive economic development mainly at the rural level. It may be pertinent to state at this juncture that lack of any development worth its salt coupled with galloping corruption is attributed by many political observers as one of the principal reasons behind the growth of real hardcore militancy in the Jharkhand-Chattisgarh region.

Unfortunately for the people of Assam, development is now a distant, meek and weak cry at the ground level.  It now only resides in the realm of high rhetoric of the saffron brigade.

Now that the elections to the Lok Sabha are barely a few months away and having realized that bombastic rhetoric like ‘Smart City’, ‘Make in India’ and the like have miserably failed to dupe the people any more, the BJP dispensation has seemingly no alternative other than falling back on its all-time one-point agenda of Hindutva.

Unfortunately for the people who highly uphold the secular fabric of the Constitution and have made secular way of life their lifestyle,  the BJP heavyweights of Assam are, as of now, openly taking recourse to aggressive and hardcore Hinduism, including making reference to ‘Hindu Rashtra’ in total disregard to the secular framework of the  Constitution.

The Assam BJP is apparently working on a two-pronged strategy. Firstly, to project the controversial Citizenship (Amendment) Bill, 2016 (CAB-16) and the proposed granting of Indian citizenship to illegal Hindu Bangladeshi migrants as  highly pro-Assam with strong ingredients of protecting and preserving the rich cultural heritage of the State  while making an all-out effort to divert the attention of the masses from the real problems and in the process to cover up the innumerable failures and other shortcomings of the BJP-led State Government as the 2019 polls draw closer.

The irony of this attempt of the saffron brigade lies in the sheer absurdity of the advocacy of the party that the advent of Hindu Bangladeshis nationals to the State is of utmost importance for the preservation and promotion of the rich cultural heritage of Assam. Transcending even the last limit of the realm of absurdity the, saffron party is trying to tell the indigenous people of Assam that the Hindu Bangladeshi nationals must pour into Assam if the socio-economic-cultural fabric of the people and the fragile demographic structure are to be protected.

Secondly, defying the secular framework of the Constitution and all other relevant laws that promote communal harmony, a few BJP bigwigs are openly espousing a Hindu Rashtra while projecting the Muslims as the source of all problems, mainly political, plaguing the State.  A BJP heavyweight has even gone to the extent of finding a new synonym for the Muslims – and the word is ‘Ajmal’. The BJP ought to know that the identity of the indigenous Muslims of Assam is that they are first Indian and then Muslims and are least bothered as to who or what Ajmal is.

The indigenous Muslims of Assam don’t need any lesson from anyone as to how to make positive contribution towards the growth, development and defence of the State. In this respect, those not aware of the history of Assam or the newly emerging class that is keen on distorting history (who may be termed as street historians) may be told of the heroics of the like of Bagh Hazarika (alias Ismile Siddiquie) or freedom fighter Bahadur Gaonburah (Bahadil) who was deported by the British to die unwept and unsung in the infamous Cellular Jail (Kalapani) in Port Blair.

Again, one of the closest disciples of Mahapurush Sankardeva was Chand Khan (alias Chand Shai or Chand Kai).  In the realm of language and literature, the likes of Mafizuddin Hazarika, Syed Abdul Malik, to name just a few, have made invaluable contribution. One also cannot forget the martyrdom of Mujamil Haque of Mangaldoi during the language movement.

With a handful of saffron bigwigs openly letting loose a tirade of venomous verbal attacks against the Muslims of Assam, one shudders at the thought if at some quarters a game-plan is at work to rake up communal disturbance on a big scale (as had happened in Gujarat in 2002) as the 2019 polls inch closer.  Again, the BJP’s apparent all out effort to get the controversial CAB-16 passed in the Parliament and assented into an Act before the polls points at the saffron party’s election strategy of polarizing the voters on Hindu line.

Going by the hardcore communal approach adopted by the BJP in the backdrop of its all rhetoric and sky-rocketing promises sans any development at the ground level after being in power for nearly five years at the Centre and over two-and-a-half years in the State, one ruminates if the saffron brigade is beginning to find the ground below highly slippery.

Is the BJP sensing an outright defeat in the 2019 polls? Are some State heavyweights sensing the bursting open of some severest kind of problems if the party is voted out of power at the Centre? Is the BJP left with no option other the twin-issue of Hindu Rashtra and Mandir in the upcoming Lok Sabha polls? Is the Assam BJP also working on that roadmap?

Reports emanating from various quarters across the country indicate that, as of now, the scenario is not at all rosy for the saffron camp as the 2019 polls loom large across the face of the nation.