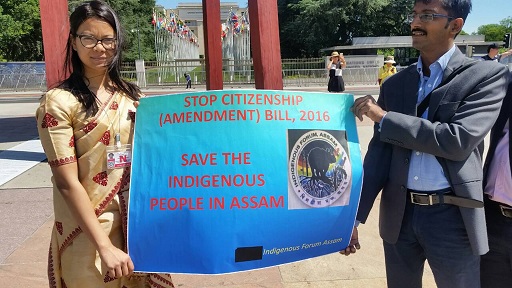 However, following the capture of the seat of power in Delhi by the saffron party and its allies, on the demographic, cultural and linguistic fronts the indigenous people of Assam seem to be blinking at a hazy horizon with the ground below trembling and seemingly threatening to give way.

At this juncture, it may be highly relevant to delve into the history of Assam to understand the evolution of the multi-faceted and multi-coloured culture of the indigenous people and their language(s) in the proper perspective.

There cannot be two opinions over the historical fact that Mahapurush Sri Sri Sankardeva laid the foundation of the edifice on which the present day greater Assamese society stands. Having said that, due recognition and credit must be given to many other stalwarts from the ethnic communities who made invaluable contribution towards that end.

In the arena of language, through his immortal literary works, the great saint, philosopher and social reformer put in all efforts to give a permanent base to the language(s) his time. Significantly, in his writings, the Mahapurush generally resorted to the use of Brajabali which indeed may be considered as a forerunner of the Assamese language in vogue today.

The era of Srimanta Sankardeva is now over five centuries old. Much water has flowed through the Brahmaputra since then and much social and political changes and upheavals have lashed across the face of Assam. The language left behind by the great Guru has evolved into what we refer to as modern Assamese language today.

And centuries later, the great efforts of the Mahapurush led to the flowering of the likes of Sahityarathi Lakshminath Bezbaruah, Roopkonwar Jyotiprasad Agarwala and our dear and near Bhupen da, to name just a few.

In the cultural arena, the Bhaonas, Ankiya Naats, Borgeets and the like constitute the foundation of our rich culture and heritage even today.

In between, soon after Assam came under British rule, the Assamese language and literature witnessed the blackest of eclipse, courtesy the Bengali Babus who were brought in from Calcutta (now Kolkata) to assist the British administration in Assam.

Unfortunately for Assamese language and literature, the wily Bengali Babus were immensely successful in convincing the British rulers that Assamese was only a dialect of the Bengali language and not a language in the proper sense of the term. This led the British to accept Bengali as an official language of Assam.

Fortunately for Assam, soon after this sad development, a team of American Baptist Missionaries led by Nathan Brown and Miles Bronson arrived in Assam. To their utter disbelief and astonishment, Nathan Brown and his accomplishes discovered that the British rulers were wrongly guided by the Bengali Babus on this count.

Backed up by their research work, they established before the British administration that Assamese was an independent language with an independent script. The British on their part accepted the argument of Nathan Brown and fellow missionaries and made Assamese an official language in Assam. Thus Assamese was saved from virtual extinction on account of the arduous task undertaken by the Baptist missionaries.

Well, that was during the early part of British rule in Assam and the matter was judiciously attended to by the rulers, exercising complete neutrality.

Now that our independence is over seven decades old, ‘neutrality’ has seemingly turned into an alien feature in our official and political life. As of now, a much greater threat looms large over the destiny on the people of Assam than the one perpetrated by the Bengali Babus through their misinformation campaign among the British rulers on the status of Assamese.

With the blessings of New Delhi in the shape of the extra-constitutional Citizenship (Amendment) Bill, 2016, crores of Hindu Bangladeshi nationals may possibly be waiting across the border to enter Assam and establish their ‘Jati, Mati, Bheti’ in Assam. The horrendous outcome that may emanate could be anybody’s guess.

The numerical superiority of the new comers may turn out to be a death knell for the existing fragile demography while the indigenous population may become refugees in their own land. One wonders if even the slightest of resemblance of the rich culture and language(s) of the locals would be witnessed once the Hindu Bengali nationals from across the border establish their ‘Jati, Mati, Bheti’ in Assam.

Whereas enumerating the immensely rich culture of Assam may run into volumes, beyond any doubt, its fountainhead(s) are the Satras set up by Sri Sri Sankardeva and his illustrious disciples like Mahapurush Madhab Deva, Mahapuruh Damodar Deva and many more. If with the blessings of the Centre crores of Hindu Bangladeshi nationals find foothold in Assam, one shudders the thought as to what would become of the Satras. Will even the word ‘Satra’ become a forgotten term?

While the Citizenship (Amendment) Bill, 2016 poses a huge threat to the very existence of the indigenous communities of the state, two other notifications stealthily issued by New Delhi in sync with the Bill have seemingly accomplished the spade work that the Bill would otherwise have done after becoming an Act. Away from public glare, the BJP-led dispensation at the Centre issued two notifications (Orders) way back in 2015 – the Foreigners’ (Amendment) Order, 2015 and the Passport (Entry into India) Amendment Rules, 2015.

According to a media report, “senior BJP Central ministers have conveyed to a visiting delegation of Hindu Bengalis that the two Central notifications would guarantee their protection, even if the Citizenship (Amendment) Bill, 2016 is not passed by the Parliament. Hence, the question arises if through the two Orders the Government has to a significant extent already accomplished the purpose for which the extra-constitutional Bill has been brought in.

The question also arises as why so much importance is accorded by the Government to the well-being of Hindu foreigners when the state of affairs at home far from being satisfactory.

For sure, addition of crores of Hindu Bangladeshi nationals to the existing population of Assam would lead to a permanent Hindu vote bank for the saffron brigade. But a still more serious question surfaces. Has the Centre, for some obscure reason, lost faith in the indigenous people of Assam and the Northeast and is panning to have in place a ring of Hindu Bangladeshi nationals as its sentinel in the border States?