The ruling BJP is trying to mend the NRC issue alone without taking any other political party into confidence: CRPC 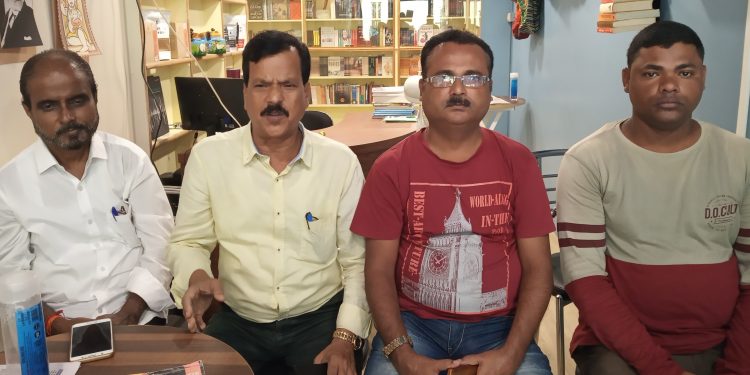 CRPC members addressing a press meet in Silchar on Friday.

Citizens Rights Preservation Committee (CRPC), Assam, has vowed to take the issue of National Register of Citizens (NRC) to the national platform.

Addressing a press meet in Silchar on Friday, CRPC secretary general SadhanPurkayastha said that the whole issue is a political one and has to be addressed taking all the political parties into confidence.

“It is completely absurd to test the citizenship of 19 lakh residents of Assam through a Foreigners Tribunal,” he told Northeast Now.

He said this would lead to wastage of crores of money besides the excluded people will have to undergo inexplicable sufferings during the course of their cases in the Foreigners Tribunal (FT)s.

Purkayastha further said, “Out of the 19 lakh missing names, we are sure more than five lakh of them won’t be able to approach the Foreigners Tribunals due to financial problems.”

“These Foreigners Tribunals have been made to pinpoint foreigners instead of working in favour of listing or identifying genuine Indian citizens,” said Purkayastha.

He alleged that the ruling BJP is trying to mend the NRC issue alone without taking any other political party into confidence.

CRPC general secretary Kishore Bhattacharjee said, “It has come to our notice that there are a lot of discrepancies and gross anomalies in the NRC update process and there was a deliberate attempt to keep the names of some particular communities out of the final list.”

“We are not only talking about Hindu Bengalis, but many other communities like the Karbis, Koch Rajbonshis, Tea Tribes, also have found their names missing. It shows that it been deleted intentionally for having close proximity with surnames of a particular community,” said Bhattacharjee.