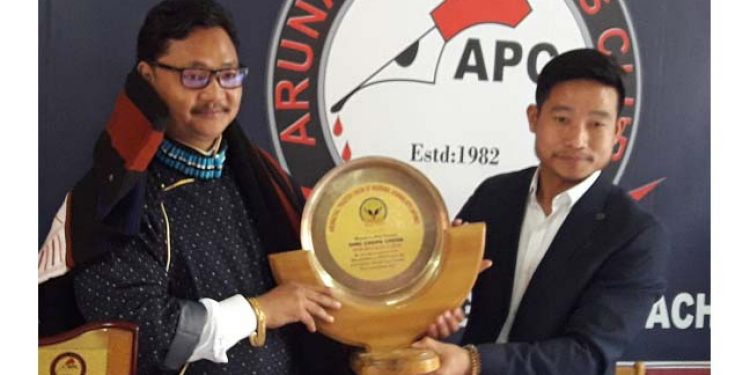 Before offering his resignation, he announced the name of Dodum Yangfo, Editor-in-Chief of Dawnlit Post, as acting APC President.

Cheda read out his resignation note amidst a gathering of emotional APC, APUWJ and AEMA members. He had taken the charge as APC President – one of the most challenging responsibilities in the State – on August 30, 2013. Within five years of his tenure, the State media have seen significant changes under his leadership.

“My resignation is solely based on personal reason and it does not in any way imply that I was not satisfied with my association with the media fraternity,” Cheda said in his resignation letter.

He has stepped into active politics, and would formally declare his candidature from the Chayangtajo Assembly (ST) constituency on November 30 at Seppa, East Kameng.

“Do not think I am running away from the responsibilities of the fourth pillar of democracy. I am going to shoulder more responsibilities for the media fraternity in the years to come as a lawmaker with power in hand to fight for your causes on various platforms if I am elected,” Cheda said, choking with emotion.

He shared his contributions towards the media persons’ welfare initiatives including registration of Press Club, enhancement of working journalists’ welfare fund.

“With the allocation of Rs 5 crore for the construction of the Press Club building along with a plot of land in the heart of the Capital city to which, I, on behalf of entire media fraternity of the State, remain indebted to the State Government led by Chief Minister Pema Khandu. I hope my successor will work with the same zeal,” he added.

Cheda hoped that with the growing number of young journalists, the media fraternity will grow even more and contribute to the development of the society.

“I thank each one of you for supporting me in my endeavour as the APC president for two consecutive terms. Your guidance and support will always be a reference point for me to work hard and responsibly,” he added.

APUWJ president Amar Sangno, briefing about Cheda’s contributions to the State media, said: “Your services to the press fraternity of Arunachal will remain peerless. You brought a significant change in the State media for which entire media fraternity extends gratitude to you.”

“Our best wishes will be with you always. We do hope that you will be a successful politician like you were a successful President of APC,” Sangno added.

“Your stint as president since August 30, 2013, will remain unparalleled and unsurpassed,” the APUWJ president said.

Acting president Yangfo, accepting the resignation letter and acknowledging the responsibility given to him, said that he would try to replicate Cheda’s way of working for the welfare of the State media and sought support from each and everyone.

Advisor APC and former president Taba Ajum, lauding the contributions of Cheda for the welfare of press fraternity in the State, said that under his leadership lots of problems pertaining to media houses and journalists were solved.

“Your contribution towards the State media will always be remembered,” Ajum said while wishing him a better future.

AEMA President Mukul Pathak said that during Cheda’s four-and-a-half-year stint as APC president, Arunachal media witnessed a lot of positive changes and streamlining of the system.

Senior journalist Tongam Rina lauded the straightforwardness and decision-making ability of Cheda. She wished him a better future and urged him to continue serving the society.