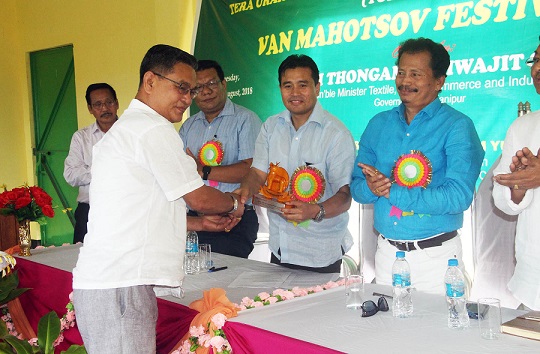 The government of India has set a target of 33 percent tree cover including forests and non-forest areas in the country by 2020, Manipur Trade, Commerce and Industries Minister Thongam Biswajit Singh said.

In his speech, the minister, who also holds the rural development and panchayati raj department portfolio, highlighted the importance of planting trees to put a check on the environmental imbalances and said trees should not be planted only on a specific date or day but should be planted whenever possible.

Stating that it is also important to look after the trees and further appealed to the locals and the organisers to ensure that the tree saplings planted today are protected, he said the festival will help in creating awareness among the masses about the importance of tree plantation.

Lauding the organisers of the festival, he said tree plantation in such an industrial estate is a welcome act as the trees will help in balancing the pollutants emitted from the industrial units.

He further said the media should also maintain a balance in their reporting to give clear information to the general public.

It may be mentioned here that the state government under the initiative of the state forest department have been undertaking large scale agar plantation drive in the state after chief minister N Biren Singh launched the initiative on June 24 this year.