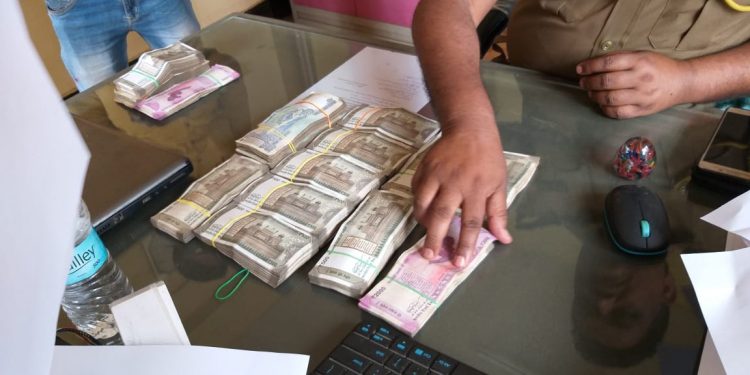 Seizure of huge amount of illegal cash ahead of the third phase of Lok Sabha polls has forced the Income Tax directorate to institute a special task force to probe into high value bank transaction in the northeastern states.

Income Tax officials on Monday said that they have seized unexplained cash of Rs. 8 core till Monday (April 22) while the seizure was only Rs. 1.21 crore in the run-up to Lok Sabha polls in 2014 — a nearly 7 times jump.

“For the ongoing Lok Sabha elections, the last polling date in Northeast is April 23. The directorate has made cash seizure exceeding Rs. 8 crore till today, which is nearly 7 times of the previous haul. This amount compares favourably even with many other jurisdictions, which have much higher tax revenue,” sleuths of the department said on Monday.

Principal director of Income Tax Investigation for NER, Sanjay Bahadur attributed this phenomenal outcome to timely preparation for the polls and identification of expenditure sensitive locations in consultation with state authorities and police and to gathering of ground intelligence by directorate investigators.

“Limited manpower of about 150 officials was strategically deployed to set up an extensive network of Surveillance Units to cover 112 districts and in 12 Air Intelligence Units (AIUs) for interception of unexplained cash,” Bahadur said while appreciating the cooperation of CEOs, state police, CISF, Assam Rifles, CRPF, BSF and banks.

“A Special Task Force, jointly headed by Subhrajyoti Bhattacharjee and Mrinal Das, has also been constituted to investigate thousands of suspicious high value cash deposits and withdrawals in 68 banks operating in North East. The Task Force will submit its preliminary findings within one month and strict consequential action as per tax laws will be initiated wherever unexplained cash deposits are found,” officials said.

The directorate is being assisted by Financial Intelligence Unit of India in this exercise aimed at striking at the sources and conduits of cash flow during and immediately preceding elections in a decisive manner. It will also scrutinise affidavits of all candidates filed before Election Commission for any suppression of declared assets or liability and submit a report to ECI.