Arunachal Pradesh Minister for Public Health Engineering (PHE) and Parliamentary Affairs, Bamang Felix on Tuesday appealed to the students and youth of the State to take up sports for a healthy life and also to build a career out of it.

Felix said this while flagging off a mini marathon on the theme, ‘Run for Sports’ at the Rajiv Gandhi Stadium at Naharlagun early Tuesday morning.

Altogether 480 took part in the 12 km run from the Rajiv Gandhi Stadium to the Sports Complex at Yupia. However, the online registration recorded around 800 entries.

The run was organized by the State Department of Sports and was open for all.

Earlier addressing the gathering, Sports Director Tadar Appa informed that the mini marathon has been launched to encourage and motivate people of all ages and backgrounds to improve their mental and physical health.

Winners were selected from both men and women category. 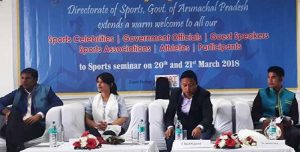 Later, the first ever seminar on sports of the State was also organized by the Directorate of Sports.