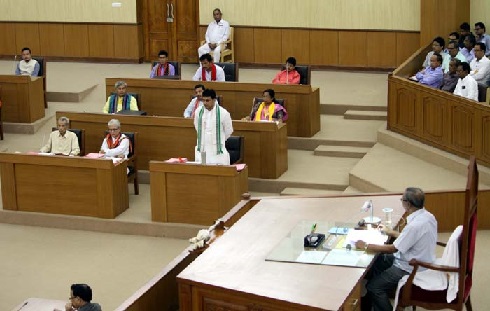 Tripura parliamentary affairs minister Ratan Lal Nath on Thursday said the week-long Budget Session of the Tripura Assembly will begin from Friday with the customary speech of the state Governor.

An Outlook India  report quoted Nath, who also holds the law, education and other backward communities portfolio, as saying: “Deputy Chief Minister (also Finance Minister) Jishnu Dev Varma will lay the budget for the upcoming fiscal 2019-20 on the second day of the session on Monday.”

During the Budget Session, which will continue till March 1, a number of important bills would be tabled, informed parliamentary affairs minister Nath.

It has been reported that chief minister Biplab Kumar Deb-led BJP-IPFT government is likely to face a stormy session with the CPI(M) legislators getting ready to raise several vital issues.

Opposition Communist Party of India-Marxist legislators are expected to raise the issues of political violence, government jobs and crisis of school teachers, the report says.

The report also quoted deputy opposition leader of the Assembly, Badal Choudhury as saying: “A severe crisis of food and rural jobs is putting the people in the rural, interior and tribal areas in a harsh distress condition while the state government remains inactive and busy with other non-serious issues.”

Choudhury also said that their legislature party will meet in the evening today (Thursday) to decide the strategies for the upcoming Budget Session.

Under the Bharatiya Janata Party-Indigenous People’s Front of Tripura (BJP-IPFT) regime, this will be the third session of the Tripura Assembly.