The appointments were initiated to meet the required man power strength. The Executive Member (EM) of Agriculture, BTC, Ansumwi Khungur Boro ceremonially distributed the appointment letters in presence of BTC Speaker Tridep Daimary and other guests.

Talking to media persons on the side-lines of the programme, EM Ansumwi Khungur Boro said Agriculture was the prime source of income in BTC as the people of the region depend on agricultural products.

He said his department has been giving emphasis on improvement of markets and agriculture business and boosting technology for modern methods of cultivation.

“Our markets for agriculture products have no uniform and controlled standard prices as other parts of the country and so the council is looking forward to standardize the prices for the benefits of farmers”, he said adding that neighbouring country like Bhutan and sister state of the North-east, Sikkim became complete organic.

He said his department has been trying to establish BTC as organic zone through the vision of Bodoland Organic Mission.

Boro also said the BTC Agriculture department has shortage of manpower to sustain the department.

He called upon the newly appointed extension assistants to dedicate themselves for the farmers of rural areas.

He also said the appointed assistants would be given training in agriculture sector to train up farmers of rural areas.

He said there had been tendency among the government employees who are reluctant to render service in rural areas.

The farmers mainly inhabit in the rural villages and so the employees must give time and dedication for the poor farmers in vulnerable areas, he said, adding that the newly appointed assistants should not hesitate about their posting and they should follow the official instructions and work in their respective place of posting.

Echoing in the same vein, EM of Irrigation Rajib Brahma said people just sought government job but after getting appointment letter, many of them will move for transfer in their suitable locations preferably in urban areas. 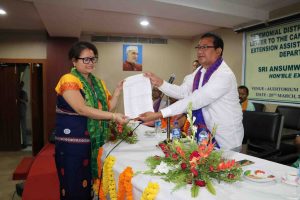 He said, “The army and other paramilitary personnel have been dedicating their lives in every nook and corner of the country but our people are reluctant to dedicate their service in just small areas of four BTC districts which indeed is funny”.

He asked the higher officials to force them work for the rural farmers with dedication.

Sargiary said the total strength of the AEA in four BTC district were 324 with 264 in position.

He said there were 78 vacant posts of AEA in four districts of which 61 assistants have been appointed on Tuesday after holding interview through Central Selection Board (CSB), BTC and 17 more posts are still lying vacant which would be filled up later.

In Tuesday’s appointment, five posts in Kokrajhar district, 30 in Baksa district and 26 posts in Udalguri district have been filled up.