The 61-km stretch in Dhubri sector, where the Brahmaputra enters Bangladesh, is the most difficult frontier for the BSF to guard, especially during the monsoon.

Absence of floating Border Outposts and shortage of speed-boats has made border guarding extremely difficult for the Border Security Force (BSF) along the flooded Dhubri sector.

The 61-km stretch in Dhubri district, where the Brahmaputra enters Bangladesh, is the most difficult frontier for the BSF to guard, especially during the monsoon.

Release of excess water on Wednesday from Bhutan’s Kuricchu Hydropower Project resulted in high floods in seven districts in Lower Assam districts, has made BSF’s task even more difficult.

BSF’s Border Outposts are under water in several places, and border fencing has also been breached in some of the areas.

Also Read – Assam floods: Do we have a robust system to take to challenges?

Though two battalions are deployed in the area, BSF personnel on the ground are finding it extremely difficult to carryout round-the clock patrolling because of shortage of speed-boats and absence of floating BOPs.

In 2000, the Ministry of Home Affairs had promised to introduce floating BOPs in the Dhubri sector for better surveillance of the riverine frontier. 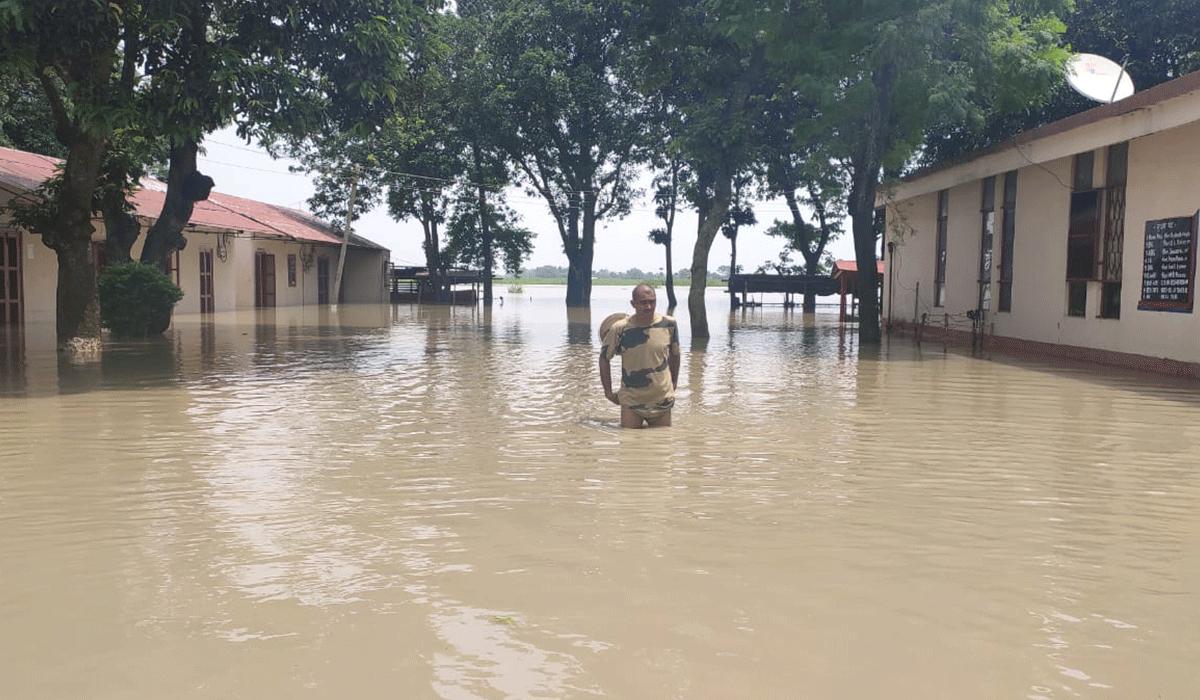 On September 11, 2003, BSF’s Additional Director-General, SIS Ahmed had announced that five floating BOPs would be deployed in Dhubri sector

Ahmed had said each floating BOP would with 37 BSF personnel, mainly combat troops. Four combat speed-boats would be attached to the BOPs, he had said.

The BSF official had claimed sophisticated weapons, including LMGs, MMGs and automatic grenade launchers would be mounted on the floating BOPs.

Unfortunately, in last 20 years, the BSF could not deploy any floating BOPs along the Dhubri sector.

Though advanced electronic surveillance system was introduced, absence of floating BOPs and scarcity of speed boats made the jobs of checking infiltration and smuggling difficult for the BSF personnel.

While the electronic surveillance system is good in identifying smuggling or infiltration attempts, lack of infrastructure has handicapped the BSF troops to take prompt action against intrusion and smuggling.

Generally, the modern gadgets provide feeds to the BSF control rooms and alert the troops to initiate quick actions to thwart any possibility of illegal border crossing and smuggling.

Without the basic infrastructure, the marooned BSF personnel are now seen using banana tree boats for patrolling, and other duties.

Despite several attempts, BSF’s Inspector General of Guwahati Frontier, Piyush Mordia was not available for comments.

Meghalaya: Over 82,000 students to appear in MBoSE’s SSLC, HSSLC exams

Meghalaya: Over 82,000 students to appear in MBoSE’s SSLC, HSSLC exams