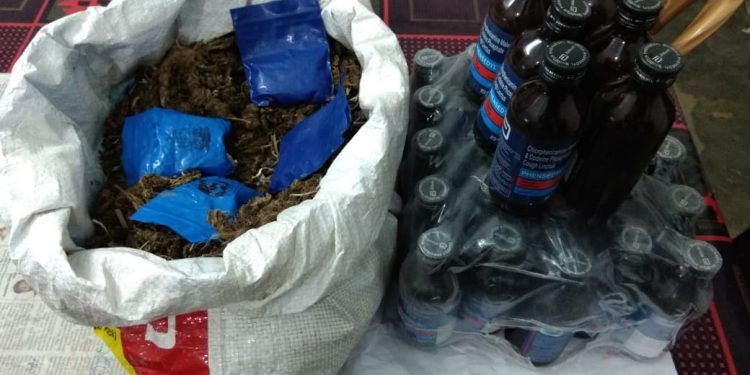 Based on specific intelligence inputs from BSF sources regarding contraband goods being concealed, personnel of Ex 145 Bn BSF conducted a search operation in Tripura villages.

The search operation was carried out in the rubber forest area between Tarapokar Village and Santinagar Village under Sonamura Police Station.

The villages lie in Sepahijala district of Tripura. After a thorough search operation, the BSF personnel found two plastic bags concealed in the bushes and recovered 780 nos of Yaba tablets worth Rs 3,99,348.

One kg of ganja worth Rs 5,000 and 31 bottles of Phensedyl worth Rs 4,348 were also recovered from the bushes.

The seized items were handed over to the Sonamura Police Station authorities and a FIR is being lodged in this regard against 23-year-old Anesh Miah and 25-year-old Munir Hussain, both residents of Tarapokar Village.

A patrolling party of Kamthana border outpost, Ex 74 Bn BSF, also seized 19 cattle worth Rs 1,18,400, and 15 kg ganja worth Rs 75,000. The cattle were seized while miscreants were trying to smuggle them from India to Bangladesh.

The seized cattle and ganja were handed over to Madhupur Police Station authorities.