Breather for employees of two paper mills in Assam…finally

The Central Government on Saturday has released the requisite funds to Hindustan Paper Mills Corporation for paying three months’ salary to the employees.

The Union Ministry for Heavy Industries and Public Sector Enterprises released the fund on March 31, the last day of the fiscal year. 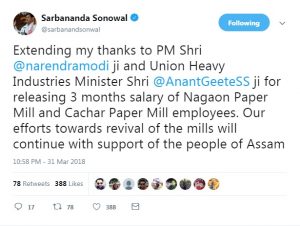 ‘Extending my thanks to PM Shri @narendramodi ji and Union Heavy Industries Minister Shri @AnantGeeteSS ji for releasing 3 months salary of Nagaon Paper Mill and Cachar Paper Mill employees. Our efforts towards revival of the mills will continue with support of the people of Assam’.

Notably, employees of the two paper mills were finding it hard to meet both ends as they had not received their salaries for more than a year. 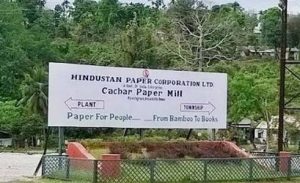 Many organizations of the State also extended their solidarity to the employees of both the paper mills and participated in the agitational programmes.

Despite assurances from several quarters, the matter was still pending.

It was only after Sonowal’s intervention, who had persuaded the Centre, the Union Ministry for Heavy Industries and Public Sector Enterprises had finally released the amount.

Meanwhile, efforts are on to revive both the paper mills involving third parties.