The All Bodo Students’ Union (ABSU) and the BTC Secretariat on Saturday observed the 62nd birth anniversary of Bodofa Upendra Nath Brahma at his burial ground in Thulungapuri at Dotma and in front of the BTC Assembly at Bodofa Nwgwr in Kokrajhar simultaneously.

Rich floral tribute was paid to the Bodofa by Dr Subung Basumatary, Chairman of the Bodofa UN Brahma Trust at his statue in Dotma while Bodoland Territorial Council (BTC) Executive Member (EM) Doneswar Goyary paid floral tribute at the statue of the Bodofa in front of BTC Assembly in presence of senior officials.

As part of the programme, the General Secretary of the ABSU, Lawrence Islary, hoisted the organisational flag at Dotma followed by a students’ rally flagged off by the Director of UN Academy, Kokrajhar, Krishna Gopal Basumatary. 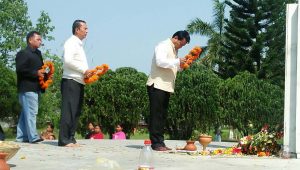 Talking to media persons, ABSU leader Lawrence Islary said the ABSU has been observing the March 31, the birthday of Bodofa UN Brahma, as the ‘Students’ Day’ and as previous years, this year too, the day was observed with a grand students’ rally throughout Kokrajhar sub-division to commemorate his selfless contributions for the down-trodden people of the region.

Islary also said the ABSU has been demanding that March 31 be declared government holiday as a mark of respect towards the great students’ leader of under-privileged communities of the region, Bodofa UN Brahma, but neither the BTC nor the State government has taken initiative in this regard.

Islary said, “Bodofa UN Brahma worked for the down-trodden communities, raised voice against injustices towards them and launched united movement that rocked the entire region so that the justice is delivered to the under-privileged communities.”

He also said that the Bodofa had a dream to make the Bodos a master race of the world and to translate his dream into a reality.

Former Rajya Sabha MP Urkhao Gwra Brahma said the initiative of State government to provide Rs 5 lakh to the family members of each of the Bodoland movement martyr is praiseworthy. 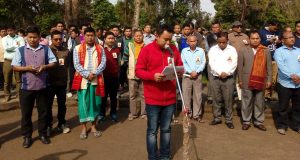 He said it was unfortunate that the Council administration has failed to assist the family members of the Bodofa in the last long fifteen years of administration.

UG Brahma also said, “The BTC came into reality as it was the part of the vision of the Bodofa and it is not a good sign to forget him and his family if the leaders really have true hearts towards the contributions of the Bodofa.”

On the other hand, BTC Deputy Chief Kampa Borgoyary, while talking to reporters on the sidelines of paying tribute to the Bodofa at his statue in Thulungapuri at Dotma, said, “Bodofa UN Brahma was the guiding force for the Bodos as well as other down-trodden people and he opened up the eyes of the people against exploitation, oppression and injustices,” adding, “The BTC was also a part of his dream.”

When asked as to why the BTC has not taken initiative to declare the Bodofa’s birthday, March 31 as a holiday, Borgoyary said the Council has already discussed the matter but it has not arrived at a final decision whether the ‘birth anniversary’ or the ‘death anniversary’ would be proper to declare a holiday.  He also said, “The Council will re-discuss the matter on the basis of public demand.”