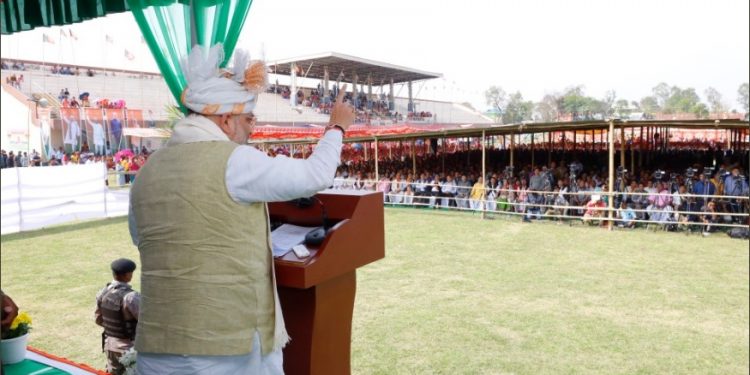 BJP president Amit Shah, who is on an election campaign tour of the Northeast states, on Friday claimed his party has transformed the entire northeastern region in the past few years.

After visiting Arunachal Pradesh in the day, Shah moved to Manipur where he addressed a gathering at Outer Manipur constituency in Thoubal district.

Shah also claimed that 1.3 lakh families in the state were given free cooking gas connections.

The BJP president also fired salvo on the previous Congress government in the state for its performance.

“Congress chief minister O Ibobi had sold out water, land and other properties including the largest freshwater lake, the Loktak,” he said.

Shah accused the previous government of engineering bloodshed between the hills and the valley people.

He recalled the development work done by the BJP government.

“The free medical facility is available for all in the state, eight helipads have been inaugurated and there are helicopter services in the hills and remote areas. 500 youths have been benefitted by the startup programmes and another 500 youths will be selected soon,” he said.