One of the unique features of Bihu, the national festival of Assam is that many communities of the state share this celebration. Celebrating a change of season as well as the time of sowing, this is a festival of much significance to all the communities which still hold agrarian activities as crucial.

The onset of spring, the season of sowing is welcomed with reiterating the importance of cattle amidst gay abandon of the youth. With time Bihu has undergone many transformations and modifications. But even then some communities do try to hold on to traditional ways.

The Rongali Bihu was originally celebrated in crop fields. The Moran community of Assam continues to do so even today. The aim of this tradition is to increase soil fertility, bring rains and pray to God for a good harvest. It also celebrates life forces as well as the union of men and women.

The songs and dances celebrate this union and have romantic and sexual connotations. But the celebration of the advent of spring time is not limited to the Assamese only. Other tribes and communities partake in similar celebrations during Bihu. Let us look at some of these varied celebrations.

The Bishua of Koch Rajbongshis 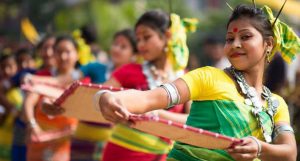 For the Koch Rajbongshis, an indigenous ethnic community of Assam, Bishua like Bihu also starts on the last day of Chaitra and continues till the sixth of Bohag. Celebrated for seven days it is also called Sat-tithi.

Just like the greater Assamese society, Bishua starts with grooming cattle and feeding them nutritious plants with medicinal value to ensure good health and productivity. The homes and hearth is also purified with such herbs. Food with natural medicinal value becomes a part of the diet of the people. This is further accompanied by prayers and celebration through music and traditional dance.

The Beshoma of Deshi Muslims

The Deshi Muslims have largely converted from the Rajbongshis or other indigenous tribes of Assam. As such there continues to be many shared culture and traditions. The Beshoma of Deshi Muslims also start on the last day of Chaitra and goes on till the sixth of Baisakh.

Just like ‘Goru Bihu’, on the first day of Beshoma the villagers take their cows to the village ponds and bathe them. After bathing them a dao (a traditional knife) is heated a little and the skin of the cow is slightly singed. This is called ‘Sengta dewa’ or ‘dagni dewa’.

After this, the people smear turmeric and neem leaves on their bodies and then wash themselves. It is believed that this will prevent all kind of skin diseases in the coming summer. On the other hand, pieces of dried gourd shell and garlic are tied on a thread and put around the waist of small children. This is believed to keep away the evil and diseases (Chotor Bao). Similarly garlic pieces are tied to the roof of the houses to keep bad spirits away.

To keep diseases away people drink something bitter and eat a mixture of seven leafy vegetables. Beshoma is also marked by traditional fairs at many places of Assam. Among these fairs, the Bura Burir Mela of Jaleshwar is a unique example of communal harmony. 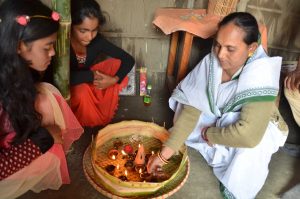 In this fair, the Muslims pray at the mazaar of Kalu Gazi and the Hindus pray to Shiv-Parvati. Kalu Gazi of Muslims is the Satya Peer of Hindus. Even the Garo people do their traditional puja and slaughter two goats in this fair. Traditional goalpariya song and dance competitions are held among children.

The Rangjali Baisagu is the prime festival of the Bodos. Marked by dance, music, food and all kinds of fun fare, this festival also marks the celebration of the preparation of fields for agriculture. Just like the larger Assamese society Baisagu starts with a day dedicated to grooming of cattle. It is known as Makhau.

The Bodos indulge in merry making and festivities while exchanging love and gifts. During this festival they don’t use the granary. Rice beer prepared at home is consumed with much delight. The festival’s end is marked by receiving relatives and friends at home.

Apart from these many other communities have their own traditions of welcoming spring. Add to this the celebration of Assamese and Bengali New Year, the entire state is in a festive mood for a week.

These festivals also tie the different communities with a common thread. However, of late, there is an erosion of traditional values and cultures. Most festivals are reduced to a cosmetic celebration through hired singers and fancy functions.

Bihu has largely turned into stage performances. As such the participation of the common people is taking a down turn. The newer generation is fed on this very idea promoted by popular media while the much loved traditions of our parents and grand-parents are taking a back seat.