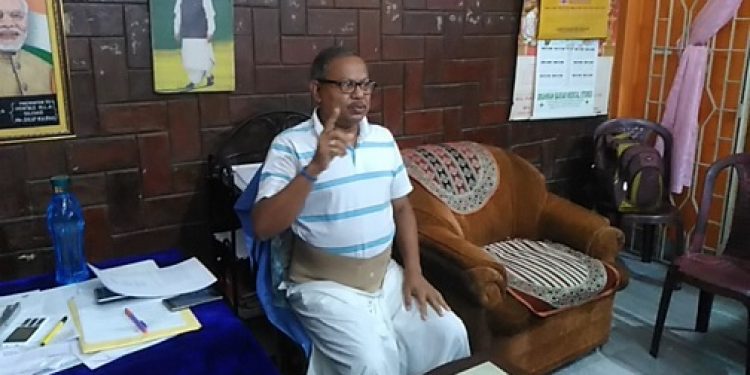 Revealing this during a press conference at his residence here on Wednesday, Dilip Kumar Paul said, “The news channel had carried out a news on March 23, 24 and 25 last where I was portrayed as one of the kingpins involved in the much-talked about coal, fertilisers and betel nut syndicate that is running in the Barak valley.”

He added, “The channel made a serious allegation that a mega syndicate worth Rs 100 crore was running in the Barak valley in the name of the chief minister of Assam with support from a ‘mastermind’ pointing fingers at me. The allegations are not only baseless and false, but, publication and airing of such news has tarnished and harmed my reputation.”

Talking in details with Northeast Now, Paul said, “If the news channel does not apologise unconditionally in writing within seven days from the receipt of my notice I would seek redressal of my grievances from an appropriate legal forum.”

In that case, charges of both civil and criminal offence will be levelled, he said.

On being asked by this correspondent whether a mega syndicate indeed runs in the Barak valley, he said, “I don’t know who are involved in such illegal business in Barak valley.”

“Such sort of syndicates were started during the Congress regime. But it is also true that our Prime Minister and our chief minister are fighting to stop such evils and we are hopeful that in the days to come, they will be able to bring a dead stop to all these bad elements and designs,” Paul said.

Paul further said, “I have in politics since 2009. I have been a businessman and I am into it with my head held high throughout my life. After winning bye-election in 2014 and later winning the Assembly seat of Silchar again in 2016, I became the deputy speaker (of the Assembly), for which, more or less everyone in the state knows me a little or more. This news which dragged my name has tarnished my image in front of each and everyone of the state.”

“I have also sent a copy of this legal notice to the Chief Election Commissioner in New Delhi stating that the news has violated the model code of conduct in all respects,” he added.