What has happened at a private dhaba at Dhola in Tinsukia district of Assam in the night of November 1 is very disturbing.

Five innocent persons of a particular community were gunned down by an unidentified group of gunmen in a brutal act of violence when some people were playing ludo.

Some forces have already been trying to provoke inter-communal stress over the NRC issue.  The Central Government’s sectarian action to amend the Citizenship Act that accepts the illegal migrants of minority communities from three neighbouring countries as eligible for citizenship after they stay in this country for six years without any rationale except being minorities in those countries is also fueling a kind of linguistic communal divide due to support from one community against the opposition of the indigenous communities.

Divergent narratives opposed to each other are in conflict giving rise to the undercurrent of mistrust fuelled by mischievous propaganda through social media.

It is actually best for the indigenous communities not to be provoked and to use democratic avenues against the ruling party’s agenda that has exposed the Assam’s indigenous people’s homeland to the settlement of a people of foreign origin.

There is no doubt that this very act emanating from vote bank interest of the ruling party is also exposing the indigenous communities to be reduced to minorities in their homeland with an uncertain political future.

Desperation is trying to find expression in various ways and the situation has turned volatile. The incident of Dhola is an ugly manifestation that has no place in democratic struggle.

In my fortnightly column in an Assamese daily last Tuesday, I had expressed my fear that the sentiments developing around the proposed amendment of the Citizenship Act and the dismissive attitude of the ruling party towards the existentialist fear of the indigenous people are creating a disturbing climate, through the fault line of which, insurgency may again raise it’s head – the rumbling of it was already in the atmosphere.

I said that such reactive violence would be a very undesirable development and it will not solve the indigenous people’s existential problem. 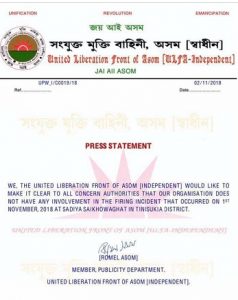 It will be too early to point fingers at some known insurgent organization at this moment. No group has claimed responsibility. ULFA has disowned it. Then who did it? Is it a deliberate act of provocation by some agent provocateurs?

We do not know it and will not like to jump to a conclusion. But whoever has done it has done a disservice to the cause of the people of the state who are democratically fighting for fulfillment of their rightful demands.

At the same time, the ruling party, having failed to understand the complications they have created through this proposed amendment, has to take the responsibility for the situation that has developed.

There are already some groups that are spreading false propaganda against the indigenous people, particularly the Asomiya, calling their genuine demands as xenophobic. These elements may launch propaganda against the Assamese people that the latter have taken to the language of gun to express their perceived frustration thus damaging the image of a people who are by nature peace loving.

I have no doubt that such dastardly act of violence will not find any support from the people of Assam. I am sure, democratic process through civil society engagement and peaceful mass mobilization by mass-based organizations is the right way to protest against and resist the settling of foreigners in the narrow socio-political and economic space of the homeland of the indigenous people.

The ruling party should also realize how their ideology has thrown the indigenous communities in Assam into a mode of desperation and frustration for being deliberately left out from the national narrative.

I personally condemn the incident, which is a violent expression of frustration and nothing more.