Gandhi meets family members of Sam Stafford and Deepanjol Das, who were killed in police firing during anti-CAA protests 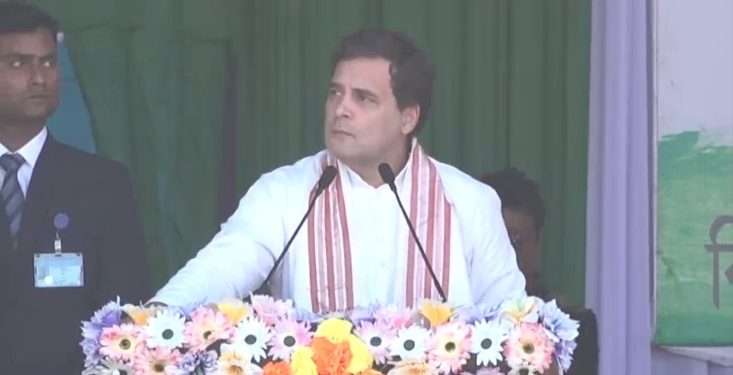 Congress leader Rahul Gandhi on Saturday said that Assam was returning to path of violence due to BJP.

“I fear Assam is returning to path of violence because of BJP’s policies. The spirit of Assam Accord which brought in peace should not be ruined,” Gandhi said while addressing a huge anti-Citizenship (Amendment) Act (CAA) rally at Veterinary College ground at Khanapara in Guwahati.

Gandhi was on a day-long visit to Guwahati to extend the party’s solidarity to the people protesting against the contentious CAA.

“I remember saying it several times in the past that the day BJP comes to Assam, peace will be destroyed and development will halt. Today as I pay homage to the martyrs killed in the police firing, I am sad on how those words have come true,” said at the Congress MP.

“Wherever the BJP goes, it spreads hate. In Assam, the youth are protesting, in other states protests are happening as well. Why do you have to shoot and kill them? BJP doesn’t want to listen to voice of people,” Gandhi said.

“We are standing with you in your happiness as well as in your sorrows. We won’t allow the BJP and RSS to destroy the history, language and culture of Assam. We also won’t let Nagpur or RSS rule Assam,” added the Congress leader.

“Assam will be run by the people from Assam,” he said adding that the people of Assam must unite as unity, communal harmony and brotherhood is the strength of the people.

“There were violence and disturbance in Assam. But then the Assam Accord was signed and peace was restored. Assam Accord is the foundation of peace in Assam and hence the spirit of Assam Accord should not be diluted,” said Gandhi.

Gandhi said neither the Prime Minister nor the Assam chief minister these days talk about economy and unemployment. “Unemployment is highest in the country in last 45 years. The Prime Minister want to make the people fight and give the money to his rich friends,” he said.

After his address, Gandhi met family members of Sam Stafford, and headed to house of Deepanjol Das at Chaygaon, who were killed in police firing on December 12 during anti-CAA protest.