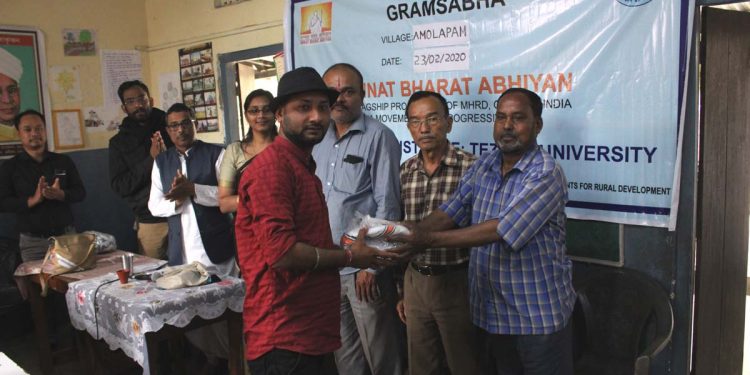 Tezpur University has focused on the transformation of ‘villages’ as it organizes ‘gaon sabhas’ in the rural areas of Tezpur under Assam’s Sonitpur district.

As part of the ‘Unnat Bharat Abhiyan’, Tezpur University held a ‘gaon sabha’ (village meeting) at Gandhi Memorial LP School in Amolapam Gaon near the university.

The ‘Unnat Bharat Abhiyan’ is an initiative undertaken by the ministry of human resource development (MHRD).

A similar meeting was organized by the university on February 16, 2020, at Harigaon village in Tezpur in a bid to create awareness about the programme.

The meeting commenced with an introductory speech by Dr. Shikha Bhuyan, assistant professor of the Department of Mechanical Engineering, who welcomed the villagers to the meeting.

This was followed by Dr. Debendra Chandra Baruah, professor and head of the Department of Energy and Coordinator, UBA.

Dr Baruah provided the inquisitive villagers an insight on Unnat Bharat Abhiyan, which aims at bringing about rural transformation by engaging the knowledge, skill, and expertise of higher educational institutions across the country.

He further elaborated on what the government wants to do to help with this flagship scheme and how Tezpur University could act as a pivotal point in the implementation of the same.

This was followed by an interactive session with the villagers, informed Dr. Rajeev K. Doley, chairperson of the media cell of Tezpur University.

A senior teacher and a resident of the area, Abdul Razzaq, pointed out the necessity of a common platform for the students to showcase their latent potentialities.

He also pointed out the need for proper allocation of teachers in the locality and the supply of clean drinking water for the students, said Doley.

Razzaq emphasized on the proper upbringing of the children from their formative years, which is achievable in collaboration with the university students.

The development of school infrastructure in the locality was also highlighted.

Another resident, Azgar Ali, emphasized the requirement of streetlights by the road connecting Tezpur University to Napaam.

He also focused on the necessity of private tutorial classes for the assistance of students appearing for the HSLC examinations.

Another teacher, Manbahadur Subba, emphasized the necessity of productive collaboration of the villagers with the university for the success of the initiative.

The rest of the queries raised by the villagers were submitted by Kishore Upadhyay, headmaster, Gandhi Memorial LP School.

As a token of assurance of continued support, four footballs were distributed among the youth, to garner their skills, and increase connectivity among themselves.

A group of coordinators, led by Upadhyay, was vested the responsibility to conduct an immediate survey encompassing the 450 households of the village, added Doley.