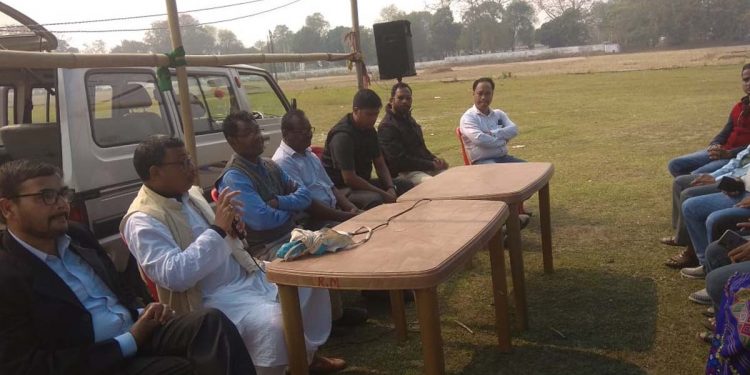 A view of the gaon sabha conducted by Tezpur University at Harigaon village in Tezpur. Image credit – Northeast Now

In order to create awareness on the Unnat Bharat Abhiyan (UBA) programme among the villagers, the Tezpur University organized a gaon sabha at Harigaon village in Tezpur under Sonitpur district.

Unnat Bharat Abhiyan is a flagship programme of the union ministry of human resource development (HRD) that aims to enrich Rural India.

A team of faculty members from Tezpur University, which is a central university, conducted the gaon sabha at Harigaon to create awareness about the various ways in which the villagers can benefit from the UBA programme.

During the gaon sabha (village meeting), the villagers were told about the Baseline Household Survey under UBA which will be carried out in the coming days.

The villagers were also told how the survey would help in identifying various challenges faced in implementing government schemes in the village which will thereby help in seeking solutions to the same.

Based on the survey, gram panchayat development plans will be developed by holding gaon sabhas and involving the community at a later stage.

Speaking at the meeting, UBA coordinator Deben Chandra Baruah sought active participation and cooperation from the villagers in the upcoming survey which will go a long way in creating a sustainable development plan for the village.

“Based on the results of this need-based assessment, Tezpur University will take up various activities for the benefit of the people and also approach the district administration or higher authorities if necessary,” he informed.

Various problems and issues faced by the villagers, reach of government schemes, among others were also discussed in the meeting.

An internal village-level committee was formed which will coordinate with Tezpur University in due course.

A separate sports committee was also formed which will make an assessment of the sporting needs of the youth from the village which will later be incorporated into the GPDP.

The villagers apprised the team about their need for solar lights, training on organic farming, biogas use, a waste management scheme and coaching for aspiring students.

The UBA is aimed at bringing about rural transformation by engaging the knowledge, skill and expertise of higher educational institutions across the country.

The ultimate goal is to bring about sustainable development in rural India by utilising the resources of the higher educational institutes and actively engage with the rural people to identify the various challenges faced in implementing development programmes and provide solutions.

Harigaon is one of the five villages adopted by Tezpur University under Unnat Bharat Abhiyan.