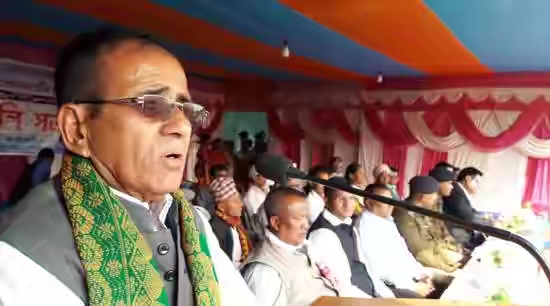 Addressing the delegates of VDP, Udalguri Superintendent of Police, Rajveer Singh said that if the villages provide a congenial atmosphere, the nation at large would gain prosperity. The gram swaraj of Mahatma Gandhi was based on the basic idea of prosperity and peace of villages, he said.

He also released a souvenir ‘Jagrat Prahari‘ published by the reception committee to mark the celebration.

The open session was presided over by the Udalguri district president of VDP organization, Motilal Rabha and was inaugurated by the retired circle organizer of VDP, Mohan Bhattarai. The meeting was conducted by the general secretary of Udalguri district coordination committee of VDP, Rohit Chettry.

The secretary of Assam State Coordination Committee of VDP, Jatin Bhadhai while addressing the gathering appealed to initiate women VDP in the district.

He also stated that the mutual coordination between police and VDP would be beneficial to maintain peace and normalcy in the region.

On the next day, the VDP flag was hoisted by Motilal Rabha while the lamp was lit by Gangaram Sarma and smriti tarpan (tribute to martyrs) was done by Rohit Chhetry.

The cultural groups of Bodo, Santhali, Garo and Nepali entertained the people and also given a message of mutual integrity among the ethnic communities in the region.