Two music bands from Diphu in Karbi Anglong district on Assam, Rongbin-The Secret Realm and Ambush got selected in the audition for ShiRock Festival.

ShiRock Festival is organized by the state of Manipur and the rock music competition is for bands from the north-eastern states only.

Two auditions were held, one in Imphal and another in Guwahati on April 9 and 10 and April 12 and 13 respectively.

The Guwahati audition was held at Cotton College in which 13 bands participated.

Among them, these two bands, Rongbin-The Secret Realm and Ambush from Diphu, Karbi Anglong. 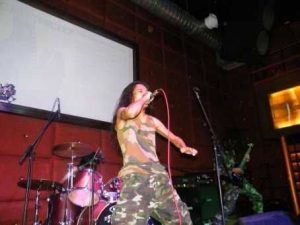 Rongbin is a death metal band with Charles Timung as the frontman and Ambush is fronted by Risim Rongpi.

Both the bands recently won accolades at the Red Panda Winter Carnival 2018 at Gangtok in Sikkim held from January 8 to 18 and organized by the Tourism Department of that State.

Rongbin was the runners up and band members also won individual prizes with Risim Rongpi winning the best vocals award.

Manager of Rongbin Buddha Teron said this time the contest will be tough.

“We are expecting strong contestants this time. All the bands selected for the final competition are winners of one or the other rock contest. Granite Yard of Sikkim has beaten us at the Red Panda (Red Panda Winter Carnival, Gangtok, Sikkim). We have started jamming; we are trying to come up with something new as I know the competition will be gruelling,” said Teron.

From the two auditions, 20 bands were selected who will have to sweat it out at Bakshi Ground of Ukhrul in Manipur on April 24 to 28. 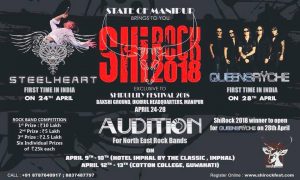 The winner will get to open the concert on the final day of the festival on April 28 in which American heavy metal band Queensryche will perform.

The 20 bands which went into the final list for the rock contest are four bands from Assam.