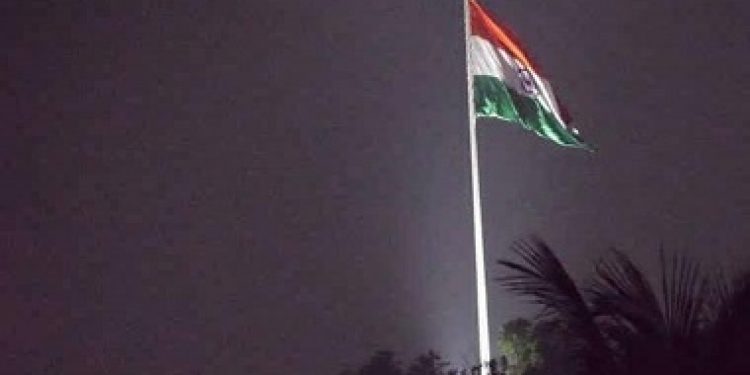 Finally, it has come up to adorn the Guwahati skyline.

Guwahati, the gateway of the Northeast can now take pride in possessing one of the tallest National Flags of the country.

The flag has been erected at Gandhi Mandap at an estimated cost of whopping Rs 2.65 cr.

This is the third tallest flag post in India with a height of 300 ft and with a flag of 120 x 80 ft dimension.

The basement for the flagpole, at Gandhi Mandap in Sarania hilltop, is seven metres with five metres under the ground.

The tallest national flagpole with 360 ft height and with a flag of 120×80 feet dimension was installed along the India-Pakistan border at Attari in Amritsar while the second tallest Indian flagpole was installed at Kolhapur in Maharastra with a height of 303 ft.

The flagpole was supposed to be completed before the 72nd Independence Day this year.

However, it could not meet the deadline and it has come up finally after around one month from the Independence Day.

High strength steel has been used in the pole which was specially transported from Pune.

Aircraft Warning Lights which are high intensity devices used as collision avoidance measures have also been used in the pole.