The transport workers’ unions have called for series of chakka bandh in Assam in support of their various demands including implementation of the welfare scheme for the private transport workers proposed by the Assam government.

The transport unions said if their demands are not fulfilled by the Assam government, they will observe chakka bandh for 72 hours again from February 25-27, 2021.

The transport workers’ unions have also demanded the withdrawal of the anti-farmer agriculture laws.

The unions in a joint statement said the government till date has not made any scheme for the welfare of the transport workers.

“That means, the government has not recognized the service of motor transport workers. Rather it has become a habit of harassing them through new rules and regulations,” the joint statement said. 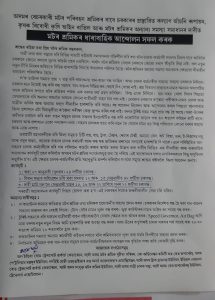 They said during the lockdown, the vehicular traffic was off the roads in Assam for 7 months.

“But the government did not provide any aid to the motor transport drivers and workers. The government is also not ready to waive off the tax of the transport vehicles which it had stopped from moving,” the statement said.

“Even after repeated appeals and agitation, the district administration has not set up a free coronavirus testing centre at Khanapara,” it said, adding, “Therefore, the tourist vehicles have failed to move.”

The unions also alleged that the incentives of the Ola-Ober cars are not being paid rather 30% of their commissions are being cut, the statement said.

The unions have called for the chakka bandh demanding a solution to their various demands and urged the commuters to extend support towards them.