Trade unions oppose merger of NEEPCO with other PSUs

The merger of NEEPCO will not be in the interest of the region, say trade unions

All the four trade unions of the North Eastern Electric Power Corporation Ltd. (NEEPCO) have expressed their resentment in the recent development of the merger and acquisition of NEEPCO with other PSUs.

Reacting to the media reports of the merger, the trade unions through a press statement strongly opposed such “merger/disinvestment/privatization by the ministry of power”.

The trade unions said the NEEPCO was established in 1976 under the North Eastern Council (NEC) not only to tap the vast hydro power potential in the region but also for socio-economic development of citizens of Northeastern region”.

“The merger of NEEPCO with other entity will not be in the best interest of the employees and the region,” the trade unions said in the press statement.

“At present 95% employees of the Corporation are from the region and merger of Corporation will have long term effect in terms of employment and other benefits of the region,” said the press statement.

The Corporation has its installed capacity of 1457 MW and is soon going to commission another 6W MW in Kameng Hydro Electric Project in Arunachal Pradesh. 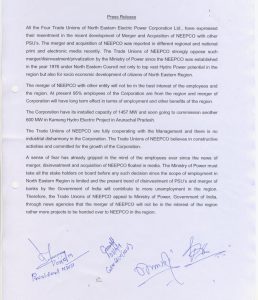 “A sense of fear has already gripped in the mind of the employees ever since the news of merger, disinvestment and acquisition of NEEPCO floated in media,” the statement said.

“The ministry of power must take all the stakeholders on board before taking any such decision since the scope of employment in Northeastern region is limited and the present trend of disinvestment of PSUs and merger of banks by the Government of India will contribute to more unemployment in the region,” it added.

The trade unions of NEEPCO told the union ministry of power that “the merger of NEEPCO will not be in the interest of the region” rather they sought more projects to be handed over to the NEEPCO in the region.