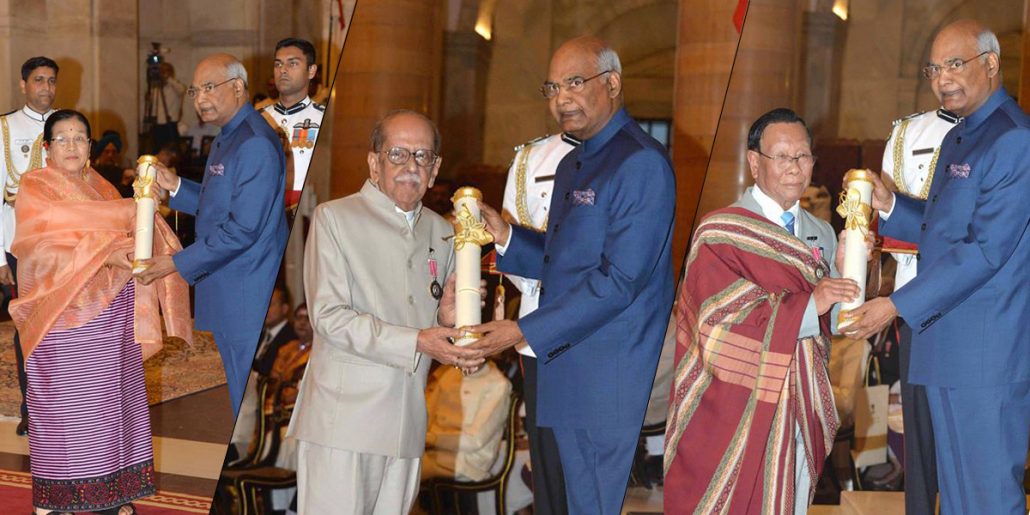 The second group of Padma awardees were conferred with the honour at a special function on April 2. President Ram Nath Kovind conferred the remaining Padma awards on Monday, in the national capital.

The first group of of Padma awardees were conferred with the honour at a special function on March 20.

Altogether nine personalities from Northeast India received the Padma Shree Award 2018 for their contribution in various fields of work.

This year, around 84 Padma awards were announced, including two duo cases (in a duo case, the award is counted as one). The list comprises three Padma Vibhushan, nine Padma Bhushan and 72 Padma Shri awards.

# Manipur’s Langpoklakpam Subadani Devi received the award for Art (Weaving). A Manipuri weaver and entrepreneur specializing in traditional Manipuri handloom and handicrafts, she has enabled Manipuri women to weave along with maintaining their familial responsibilities

# Mizoram’s A Zakia Mara received the award for Literature and Education. Mara is a writer known for his contribution to the development and growth of the Mara tribe language and community

Vice-President M Venkaiah Naidu, Prime Minister Narendra Modi and his ministerial colleagues, and several other dignitaries attended the function at the Rashtrapati Bhavan.

Padma awards – one of the highest civilian Awards of the country, are conferred in three categories, namely, Padma Vibhushan, Padma Bhushan and Padma Shri.

The awards are given in various disciplines and fields of activities such as art, social work, public affairs, science and engineering, trade and industry, medicine, literature and education, sports and civil service.