The other side of Bhagalpuri Silk brand

The Bhagalpuri Silk is a unique brand in the vast Indian Saree industry. The widespread popularity of this brand is evident in numerous emporiums across the country and online shopping sites catching the attention and appreciation of the buyers worldwide.

Apart from the Tussar Silk, the most common of Bhagalpuri Silk, the industry has been manufacturing and marketing another product—Munga, which has become immensely popular in the last one and half-decade.

This Munga of the Bhagalpuri Silk is nothing but the waste products of the exotic Muga Silk of Assam—from where it has been taken in a very cheap rate to be sold at high prices as finished products.

It denies the geographical origin of the silk while depriving its original growers of getting the prices and recognition they deserve.

Monica Burgohain (40) of Saru-Murutiya village in Dhakuwakhona sub-division of Lakhimpur district was found busy in reeling of Muga cocoon into threads along with a group of women from the neighbourhood during the third phase of the Unlocking for COVID-19 pandemic.

The group of women would weave the reeled golden thread of the Muga silk into beautiful pieces of clothes with unique Assamese designs, patterns and artwork as finished products to be sold in the local market. The demand for the traditional –Chador-Mekhela, a two-piece body wrapper worn as Saree, has a huge local demand used mostly on special occasions, is the most revered and coveted dress for the Assamese people.

The reeling from Muga cocoon is the most crucial part of the Muga culture which involves meticulous effort and concentrated skill—done entirely by women.

The area between Dhakuwakhona sub-division of Lakhimpur district and Dhemaji district in Northeastern Assam for its agro-climatic condition is the endemic zone of wild Muga Silkworm (Antheraea assamensis).

Traditionally the Muga Silk has been reared by communities for more than eight centuries after the coming of the Ahoms from Yunan, China that ruled the region for six hundred years till the early nineteenth century.

The wild silk of Antheraea genus has been endemic to the Brahmaputra valley since time immemorial and king Harshavardhana received them as gifts from Bhaskar Burman, king of ancient Assam—Kamrupa in the seven hundred century.

It is exotic silk produced from worms raised in wild among Som (Persea bombycina) plants—also endemic to this region, and the silk is extracted naturally from the larva of the worms.

The species was first described by T. W. Helfer in 1837. Muga holds such a unique position in Assamese cultural life that without it the very identity of its people will be incomplete.

Traditionally the whole activities of Muga culture include the collection of seed cocoon, graining of the seeds, rearing of the silk from larvae, the harvest of the cocoon, reeling off the cocoon and weaving the yarn to sheets of cloths. In all these activities women are the inseparable part and they play a pivotal role in transforming a wild worm to exotic golden silk fabric.

A traditional industry ran by women

The Muga culture—the rearing and making of Muga silk has been a traditional practice among the people of Assam in Lakhimpur and Dhemaji district where the women play a very important and crucial part.  Women provide at least 50 per cent contribution by direct participation in the entire activity.

At the current price of Indian Rupees, Muga silk reared in one-hectare plantation can generate a total product value of Rs.10 lakhs (approximately 15,000 US Dollar) in a year.

Clearly contribution of women in Muga culture in one hectare of the plantation will be Rs.5 Lakhs (7,500 US Dollar) annually.

Monica and her fellow weavers, who were reeling the golden thread from the Muga cocoon, were also seen keeping aside the wastes coming out from the process. Locally called Peloniya Muga (Muga waste), the women were seen taking them in their fingers from the traditional reeling tool Bhaori Kata and leaving them wrapped on a small bamboo pole.

“The wastes from the reeled cocoons are of no use and a man from outside comes to collect them giving us some lump-sum money”, said Monica. The wastes of Muga cocoon are collected by scrap dealers from door to door in this region at a very low price. The rearers too cannot demand more as they are of no use for them.

According to Jitul Saikia, a National Award-winning agriculturist and eminent Muga researcher from the neighbouring Batomari village, the Muga cocoon wastes are bought by scrap collectors by Rs 100 to 150 per kilogram from the locals and send them to Bhagalpur—the centre of famed Bhagalpuri Silk.

He further said that the cocoon bank of Assam Sericulture Department once bought 105 quintals of Muga cocoon waste at Rs. 500 per kilogram from the scrap collectors in 2017 to be converted Ghisa Muga Silk—produced in Suwalkuchi, the silk-producing hub of Assam.

Saikia informed that after 2017, the Assam Sericulture Department has not procured the Muga wastes from the Dhakuwakhona-Dhemaji region for its cocoon bank enabling the scrap collectors to supply the wastes directly to Bhagalpur with higher prices. 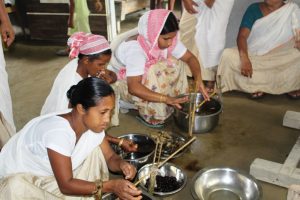 The illegal trade of collecting and supplying the Muga cocoon wastes from Dhakuwakhona-Dhemaji endemic zone to Bhagalpur deprives the local economy of the revenue it deserves.

The Muga cocoon waste collected from Dhakuwakhona-Dhemaji region is collected by scrap dealers and sent to Bhagalpur in Bihar where it is refined to ‘pure’ Muga Silk and made to attractive and fashionable and very expensive clothes.

Thus the household waste from a traditional reeling practice in rural Assam is being transformed into an exotic brand worldwide. The Assamese women weavers engaged in the production of the Muga Silk are unaware of this reality.

The Bhagalpuri Silk industry is profiting and earning an extravagant brand image from the Muga cocoon wastes collected unethically from the original rearer and producer of Muga Silk in rural Assam. “The Bhagalpuri Muga Silk is actually the Muga Silk of Dhakuwakhona-Dhemaji”, claims Jitul Saikia.

Satyavati Saikia (80), a veteran Muga rearer and weaver from Gharmora village in Dhakuwakhona sub-division is the living testimony to this tradition. “We used to make Bor-Kapor (large sheet) from the Muga cocoon waste to be used with multiple folds in bed during winter. Waistcoats, vests are also made from it and they were warmer than Edi”, says Saikia.

The octogenarian weaver laments the lack of interest by the present generation of making clothes from this waste product and their sale to scrap collectors. Their lack of awareness on the immense potentiality of the waste is unduly taken advantage by the Bhagalpuri Silk industry.