Thank you Mr Minister! You killed the Brahmaputra waterways

Because of total lack of vision and commitment of Chandra Mohan Patowary, the Inland Water Transport department could not lap up the opportunity to emerge as the carrying agent of Bhutanese cargo, and especially the high volume boulders 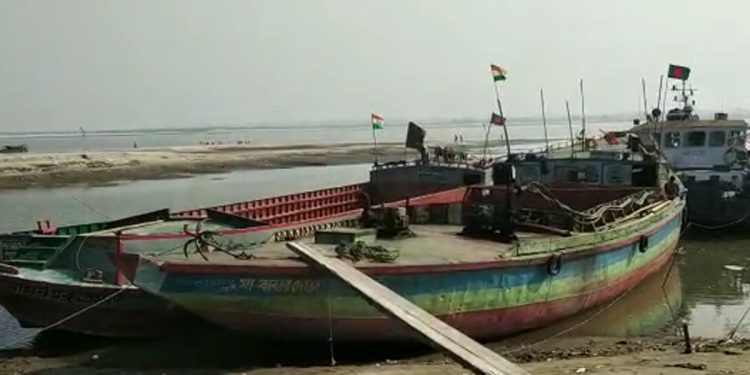 The Brahmaputra waterways, which could have been the engine of development of Assam as pollution-free and cheap navigation of cargo and passengers, is practically dead.

It was shameful for the people of Assam when on December 27, 2019, Assistant High Commissioner of Bangladesh Tanvir Mansur flagged off commercial cargo service through Dhubri river port.

Two Bangladeshi barges – MV Sagar Express and MV Alvahar – were pressed into service to carry 250 tonnes of crushed stones brought from Bhutan to Bangladesh through the Brahmaputra.

It was really shameful for people of Assam because barges from Bangladesh had to be brought to Dhubri for transhipping of the stones from Bhutan.

Assam’s Inland Water Transport vessels could not deploy vessels for transhipping of the Bhutanese consignments to Bangladesh.

Hundreds of boulder-laden trucks from Bhutan travel through Assam daily, and the consignments are exported through Dalu in Meghalaya.

It is unfortunate that Assam could not make any profit from the transit of freight through the state.

During the last couple of years, the Bhutanese exporters always wanted to make use of the Pandu Port in Guwahati to tranship boulders to Bangladesh.

But, because of total lack of vision and commitment of Chandra Mohan Patowary, the Inland Water Transport department could not lap up the opportunity to emerge as the carrying agent of Bhutanese cargo, and especially the high volume boulders.

Assam could have easily generated huge revenue by carrying huge consignments of Bhutanese boulders to Bangladesh.

That the Assam minister is not committed to developing the Brahmaputra waterways is clearly evident as he, in connivance with IWT officials, is shameless in leasing out Assam’s vessels to Kolkata.

The IWT leased out some of its barges to some operators in Kolkata, who had already taken the vessels to operate on the National Waterway 1, – the Ganga-Bhagirathi-Hooghly river system depriving local entrepreneurs of Assam.

Kolkata based firms Eastern Navigation and Reach Asia (both owned by the same person) are running at least ten such barges owned by the Assam Inland Water Transport department since 2008 in West Bengal.

The barges were meant for operating in National waterway 2 which is the stretch of 891 km between Sadiya to Dhubri.

While the BJP-led government talks so much about Jati, Mati and Bheti, Chandra Mohan Patowary never encouraged local entrepreneurs.

Some of the Assam Inland Water Transport department barges, after being used in National Waterways 1, are dumped in Kolkata.

KPL Kaziranga is one such barge which was dumped at IWT station at Dhubri. It was operated on National Waterway 1 and the salinity of the water had made the barge irreparable.

Some of the local entrepreneurs in Assam had participated in a recent bid for some of the barges meant for operating in National Waterways 2. But the vessels were leased to companies from outside Assam.

Patowary is not ashamed that condition of terminal infrastructures at Aphalamukh, Kamalabari, Neamati, North Guwahati and South Guwahati is in shambles.

In September 2018, a mechanised country boat had capsized in North Guwahati leading to the deaths of many. The boat was carrying around 40 passengers and the accident left almost 20 passengers missing or dead.

The accident exposed the failure of Chandra Mohan Patowary in ensuring minimum safety of people travelling by water.

However, it was not the first incident which saw an overcrowded boat being capsized. In 2012 another incident near Dhubri saw the death of more than 200 people in a boat caught in a cyclone.

The people living in the river islands of Assam are also solely dependent on these country boats, especially in places like Majuli, Dhubri and Jaleshwwar.

Every day thousands of people put their lives at utmost risk to access basic amenities like education and market. The government is never seen too willing to ensure that safe mode of communication is made available to these people.

Patowary also failed miserably as the industries minister, and even after spending crores on the hyped Advantage Assam event, the state could not woo any major investment.

The minister and the bureaucrats drained large portion of the state’s exchequer in the name of road shows and promotion of Advantage Assam across the globe.