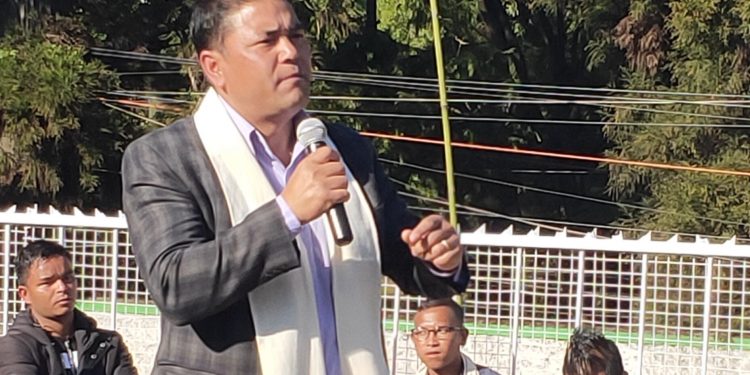 Speaking at the commemoration of the 157th death anniversary of U Kiang Nangbah here, KSU president Lambokstarwell Marngar urged the Centre to implement the ILP in Meghalaya.

Marngar said that immediately after the New Year’s Day, the Union will intensify the agitations till the demand to implement ILP in the state is met.

“We will again go to the people on the need to get ILP in the state,” he said.

He said that State government and all the MLAs had passed the resolution to demand ILP in Meghalaya not because of anything, but because of the voice of the people.

“If the Central government can give ILP to the state of Manipur why not us,” the KSU president asked.

Marngar, however, warned that if the people in power at the Centre turn down the ILP demand, “it means that they want us to re-open all old agreements that we have entered with the Union of India, and think for future course of action.”

He also said that those opposing ILP in the state and try to lobby with the Centre not to implement it in the state, they better leave the state.

Marngar also reminded that even the resolution passed by the State Assembly to include Khasi language in the Eighth Schedule of the Constitution has not been taken into consideration by the Centre till date.

North East Students Organisation (NESO) chairman Samuel B Jyrwa said though freedom has been attained from the British, but the region is yet to be freed yet from oppressor ruling.

Jyrwa also recalled the signing of standstill agreement and forceful signing of the Instrument of Accession (IOA) to merge Khasi and Jaiñtia Hills with India.

Talking about the Citizenship Amendment Act (CAA), Jyrwa alleged through this law, the move of the Centre was to divide the unity of the Northeast by promising to exempt the CAA in some states.

“We cannot allow this policy to divide our unity as indigenous tribes of the Northeast,” Jyrwa said.

Jyrwa said that the Central government has been adopting ulterior tactics which continued till date to make indigenous people of the Northeast minority in their own place.

Slamming the Centre for bringing in the CAA on religious line, Jyrwa said that as indigenous tribes of the Northeast, “We should set aside religion, but first put our identity and tribe among us.”