Born in Guwahati, Assam Priyasha had a flair for performing arts right from her childhood.

Her grandfather Natya Prabrakar Lt Satya Prasad Barua, a Sahitya Academy Awardee and was among one of the noble laureates of Assam.

Marching ahead with the legacy, Priyasha began her humble journey as a dancer/choreographer and eventually a theatre performer before she stepped into Mumbai to begin her acting career.

After completing her graduation in psychology from Delhi University, Priyasha started her career in modeling with leading brands of India and was featured in the Dove Femina collaboration calendar in the year 2009.

With a short stint in the hospitality sector as a professional, Priyasha further switched her focus on something which is very close to her heart that is performing arts. She recollects that dance was her first passion and she always used to perform her own choreography to the iconic opening soundtrack of the cult mythological show aired on television ‘Mahabharat’ when she was just three to four years old.

Later on, she trained herself professionally in several art forms which include Kathak, Bharatanatyam, Contemporary dance forms among the few, and polished her performance skills.

Priyasha is also well versed in many languages such as Assamese, Hindi, English, and Urdu. 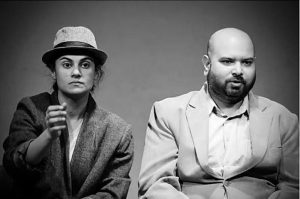 While in Delhi, she associated herself with many theatre groups and performed in some notable plays including clowning and mime piece in Tughlaq (Betaal Theatre Group), Winter’s Egg (Mime Piece), Some from Snakes (Barefoot Theatre), In Search of Darya Sagar (The Blind and the Elephant Theatre), I am + (Delhi Dance Theatre and Pulse Ensemble) and many more. She also used to work as an anchor, a voice-over artist, an assistant casting director for events and brands in Delhi.

Later on in the year 2016, she forayed into the world of Television Commercials (TVC). Her first TVC was for Britannia Good Day with Actor Deepika Padukone after which she was seen in other TVCs such as Goibibo, Duroflex, Freecharge, Hostar to name a few.

Priyasha shifted her base to Mumbai to pursue acting as her profession.

As she was familiar with the process while being associated with many casting agencies as an assistant casting director, she started auditioning for many web series.

Her first appearance was seen in the web series Made in Heaven (Season – 1) released in the year 2019 aired on OTT platform Amazon Prime, she was also seen playing the role of a journalist in Kaafir (2019) directed by Wake Up Sid famed director Sonam Nair starring Diya Mirza and Mohit Raina as the main leads aired on Zee5 OTT platform of Zee Media. 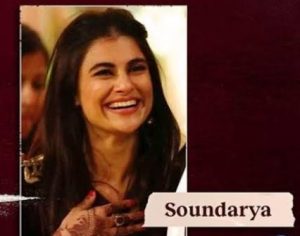 Coming on to one of her career-changing role in the Susmita Sen starrer Aarya – a crime drama web series by Neerja famed director Ram Madhwani and Sandeep Modi streaming on Disney+Hotstar OTT platform which is gaining immense popularity in recent times.

Priyasha shares her journey story right from her initial audition to essaying the role of Susmita Sen’s sister Soundarya in the web series Aarya (2020).

On September 2019 she got a call from the casting director Abhimanyu Ray to audition for two characters for the series one being Maya and the other Soundarya (lead’s sister).

Finally, she got selected for the role of Soundarya with her effortless performance perfectly fitting the arch of the character. Within a span of two months, Priyasha began shooting for her part.

Priyasha fondly remembers during one her shoot days, when she would meet the former Miss Universe Sushmita Sen for the first time in her life, she was both excited and nervous at the same time and she expresses it as a surreal, dream come true experience for someone whom she admires a lot.

She says, “It was like an adventure for me, as in when you enter a fantasy land where you are unsure of what is going to happen next is full of surprises.”

“When I tried to break the ice to approach her she spoke to me so well with so much of warmth that we bonded as sisters immediately. While rehearsing the scenes, when I was goofing around she would say to me funny girl (laughs),” she said.

“And as such I began to feel very comfortable and lost all my inhibitions with such a positive vibe of Sushmita Sen. We even used to improvise our scenes and whenever I used to approach her with some doubts while performing she helped me a lot. She is very welcoming so much so that she would become your buddy which was very unreal for me,” Priyasha added.

On portrayal of her character Soundarya, Priyasha believes that it was quite different from her in real life.

Soundarya the most loveable and pampered young one in the family was always protected by her parents and siblings and was always dependent to her closed ones while Priyasha is a very workaholic, self-driven creative individual finding a way through herself.

But it was really challenging for her to essay the role of Soundarya who was one of the principal character in the series projecting the storyline which initially starts with her wedding and ends with her funeral sequence.

And it was also a life-changing experience for her to work with some of the popular industry names such as Sushmita Sen, Chandrachur Singh, Sikander Kher, Namit Das to name a few.

Speaking on nepotism, Priyasha believes that while as outsiders we always perceive to look up to the stars Khans and the Kapoors admires them and forms an impression to go to Bollywood and to attain such name and fame.

But it is not as easy as it seems.

One has to start small, a decent start to say as in her case, had she denied playing a small character role of a nurse in the popular web series Made-In-Heaven, she would have struggled for many more opportunities on her way sooner or later.

So, work must be worshipped and one needs give his/her best shot to be able to recognized and picked up as outsider without any Godfathers or big names and contacts.

Commenting on the formal education for pursuing acting as a profession, Priyasha opines that education is important and essential but getting a PhD Degree also doesn’t not help much in molding one’s profession.

One must have some practical, on the job training be it in theatre, performing arts, acting workshops etc. 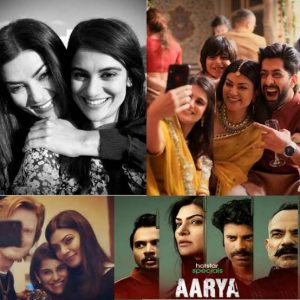 So in order to develop a strong base, education is necessary but one also can’t deny that practical work experience is a must to excel in one’s craft and profession in the long run.

Priyasha is also a nature lover and while not acting, she loves to try her hands on nature photography which she enjoys a lot.

She is also a huge fan of Chalie Chaplin and aspires to project such an exemplary role in an international project in future.

In a cutting-edged competitive and fast-paced industry of Bollywood, it is seen that many of the youngsters today gets deviated from their path while choosing a career or living in the profession of acting.

Priyasha throws light on some of such aspects which she quotes as ‘whenever you can, you need to train yourself somehow or the other.”

“Either get formal training or get engaged with local theatre groups in your area, read books and information based on the art form one is interested in, try to work on the field in whatever degree and capacity possible,” she said.

“One must also learn the nuances of camera work to some extent in order to improve. Studying the craft would help in applying in the practical field which is a need of the hour,” she added.

With such positive thoughts, Priyasha revealed her upcoming work, where she is to be seen playing a completely different character in Amazon Prime’s Mirzapur 2 – a sequel to the crime thriller Mirzapur directed by Karan Anshuman and Gurmeet Singh staring Ali Fasal, Pankaj Tripathy in the leads.

WHO team finishes China mission to probe origin of coronavirus