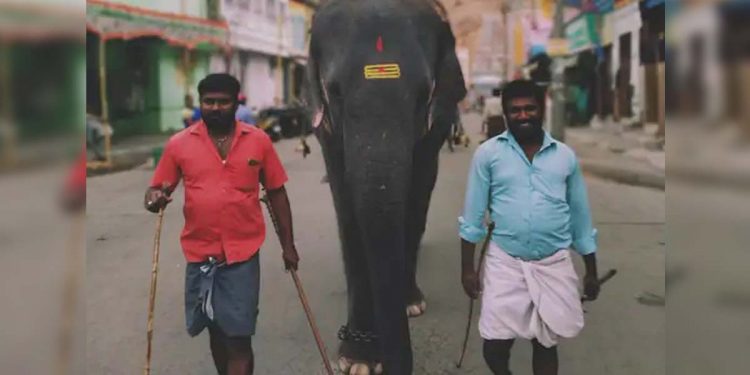 Tamil Nadu Forest department is planning to send back Deivanai, a 12-year-old elephant from Assam, to her native state.

Deivanai (Prerona) was taken to Sri Subramania Swamy Temple at Madurai in Tamil Nadu in 2014.

But the elephant was shifted from the temple to the Elephant Rescue and Rehabilitation Centre (ERRC) at MR Palayam, Trichy on May 1, 2020 after she trampled a mahout, identified as 32-year-old S Kalidasan, to death.

This has been revealed by the Madurai district forest office in its reply to an RTI query of animal activist Antony Clement Rubin filed on June 9, 2020.

According to the Forest department, the elephant has been shifted to the rehabilitation centre ‘due to its bad temper under captivity’ which resulted in the death of the mahout.

It has been revealed that the ownership certificate of the elephant was originally issued by Assam government while the Tamil Nadu Forest department issued a certificate of permission to possess the animal in Tamil Nadu.

As revealed by the public information officer of Madurai forest division in the RTI reply, the certificate issued by the Tamil Nadu forest department expired on April 29, 2017.

Question has been raised how the elephant was being used by the Sri Subramania Swamy Temple authority even after the expiry of its possession certificate.

Informing that the Tamil Nadu forest department is planning to shift back the elephant to Assam, the public information officer in his reply said the expenses for Deivanai’s shifting will be ‘borne by temple authority’.

The decision of the Tamil Nadu forest department to send back Deivanai to her native state Assam has been welcomed by animal activist Antony Clement Rubin.

Talking to Northeast Now, Rubin said, “I am glad that the Tamil Nadu forest department is taking action and sending the elephant back to Assam from where she was brought.”

“At the same time, it would have been better if they (Tamil Nadu Forest department) had taken action in the earlier stage and one person wouldn’t have lost his life,” the animal activist added.

According to reports, at the Elephant Rescue and Rehabilitation Centre at MR Palayam in Madurai, a helper was injured when Deviani suddenly swiped at him with its trunk while being given a bath on July 17.

The animal was given on lease to Tamil Nadu by Lila Bora, a middleman from Golaghat district in Assam, for three years.

But the animal was being illegally possessed by Sri Subramania Swamy Temple authority till it was shifted to the Elephant Rescue and Rehabilitation Centre on May 1 last.

Such cases of illegal possession of Assam’s captive elephants by different temple authorities in Tamil Nadu are not new.

In an earlier news report, published by Northeast Now on November 2019, said a 33-year old female elephant from Assam, named as Joymala alias Jeyamalyatha, was allegedly in the illegal custody of a temple at Srivilliputhur in Tamil Nadu and was being used for begging.

It was reported that the elephant was in the custody of Nachiyar Temple in Srivilliputhur without any valid documents.

As per the documents available with the Tamil Nadu forest department Joymala was leased only for six months in 2008 and the management of the Nachiyar Temple used Joymala mainly for begging and religious rituals for the last 11 years.