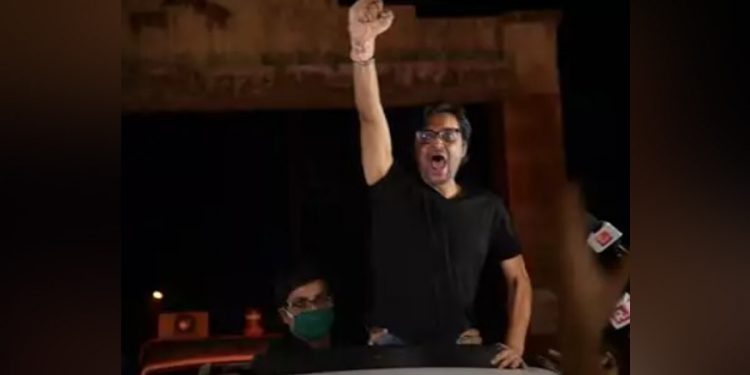 The Supreme Court on Tuesday adjourned the hearing on the plea, filed by Republic TV Editor-in-Chief Arnab Goswami challenging the Maharashtra Assembly’s breach of privilege notice, for two weeks.

According to a media report, the top court said it requires time to peruse the counter filed by the assistant secretary of the Maharashtra Assembly, Vilas Athawale.

The case was heard by a Bench of Chief Justice of India SA Bobde and Justices AS Bopanna and V Ramasubramanian.

Athawale, in his counter filed before the court, submitted that he acted on the directions of the Assembly Speaker.

Senior advocate Harish Salve, who appeared before the court for journalist Goswami on Tuesday, submitted that a notice must be issued by the top court to the Speaker.

The apex court in the hearing, had summoned the assistant secretary to the Maharashtra Vidhan Mandal Sachivalaya, Athawale, for allegedly intimidating the Editor-in-Chief of Republic TV with the object of deterring him from moving the Supreme Court.

While appearing as Amicus Curiae in the matter, senior advocate Arvind Datar stated that since the counter states that Athawale was an ‘agent’ and acted as per the Speaker, a notice to the Speaker was needed.

Chief Justice Bobde reportedly said a notice would be needed, apprehending that the Speaker should not submit that proceedings were carried out without informing him.

But senior advocate Dushyant Dave strongly argued that there was no contempt of court on the part of the Assistant Secretary.