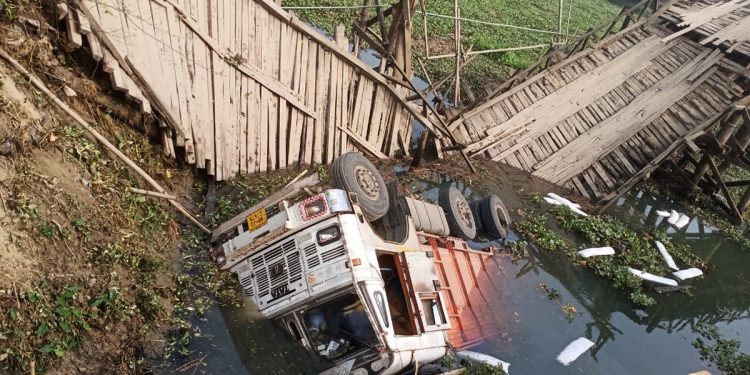 A truck from West Bengal that falls in a river at Folimari near Lakhipur police station in Goalpara district on Sunday. Image credit – Northeast Now

At least 8 people, including two students, died in separate road mishaps in different districts of Assam in the last twenty-four hours.

In the first major road mishap of the new year at Moirabari of Morigaon district on Saturday evening, a speedy 407 truck killed five people.

Three persons died on the spot.

They have been identified as Osman Ali, Wahidur Rahman, and Mazibor Rahman.

Two others, identified as Nekibur Rahman and Joynal Abedin, succumbed to their injuries on the way to the hospital.

One Golam Hussain is still fighting for life in the hospital in a critical condition.

“The accident occurred when these people were sitting behind a Celerio car.

“The 407 truck dragged all of them after hitting the car,” said Ajith Boro, officer-in-charge of the Moirabari police station.

In another road mishap that took place on Sunday morning near Tezpur, a speedy Bolero Pick-up van hit three girls of the same family, who were riding bicycles, near Kolia Bhomora bridge.

In the incident, Anjali Ray, a student of Tezpur College died on the spot whereas her two sisters – Khusboo Ray and Priyanka Ray – sustained grievous injuries.

The trio was a part of an awareness rally organised by the National Cadet Corps (NCC) scheduled to march from Darrang College to Kaziranga.

The incident reportedly occurred as the trio crossed the Kolia Bhomora Bridge. Khusboo and Pallavi were admitted to the Kanaklata Civil Hospital at Tezpur.

They hail from Garowanpatty area of Sonitpur district.

In another road mishap, an engineering college student of Tezpur, identified as Pallav Saikia, also died in a road mishap when his motorcycle collided head-on with a scooty at Bamporbotia.

The scooty rider, Tinku Deka, was also seriously wounded in the incident and was admitted to the hospital.

Meanwhile, a tractor driver was killed when his earth-carrying vehicle lost control and capsized in the Charan beel of Morigaon.

The driver was stuck under the truck.

He couldn’t be identified at the time of filing this report.

Early on Sunday morning, a 10-wheeler loaded truck from West Bengal with the registration No. WB3C-7679, fell from a wooden bridge on a river, a tributary of river Brahmaputra, at Folimari near Lakhipur police station of Goalpara district.

Though no casualty was reported, the staff members of the truck fled from the scene after the incident.

A road mishap also took place at the Gauripur of Dhubri district.

Though no one died in the incident, 7 people sustained injuries.