Sarbananda Sonowal is only interested to protect his CM’s position: Ripun Bora 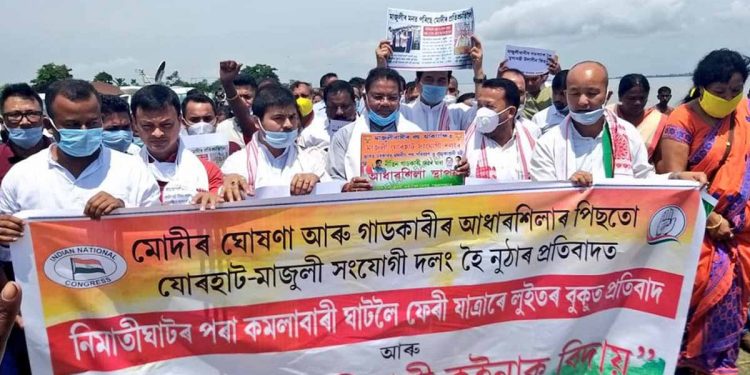 It was organised protesting against the BJP government’s failure to build a bridge connecting Jorhat with Majuli making a promise to do so five years ago.

Speaking to the media Bora said that they would undertake a protest journey on a boat from Nimatighat to Kamalabari in Majuli.

Bora said that he was referring Chief Minister Sarbananda Sonowal as the silent bride because he has never raised his voice to solve the problems of Assam.

“Chief Minister Sarbananda Sonowal has never raised his voice to solve the problem of the state. He is only interested in protecting his Chief Minister’s position,” Bora said.

“We have started the protest today to bid farewell to Sonowal. The people of Majuli should oust him in the 2021 Assembly Elections as he made false promises for gaining votes,” Bora added.

“Before the 2016 elections, Sonowal brought the then Central Road Transport and Highways Minister Nitin Gadkari and laid the foundation stone for a bridge connecting Majuli with Jorhat amid fanfare,” Bora said.

“The move helped Sonowal to gain votes and win the election,” he further said.

“I have raised the issue of the bridge a number of times in the Parliament, but I have never received any proper reply,” He added.

Speaking on the occasion, Rana Goswami said, “The Centre never intended to build the bridge. They have not made a project report to date.”

On August 3, the Congress will organise a Pratarana Diwas, protesting against the  BJP led government’s failure to tackle the flood problem of the state.