The Central Government through a notification issued on Saturday appointed two more Additional Judges in the Gauhati High Court.

The judges have been appointed for a period of two years from the date on which they assume office.

The notification, issued by Sadanand Vasant Date, Joint Secretary to the Government of India, on Saturday, stated: “In exercise of the powers conferred by clause (I) of Article 224 of the Constitution of India, the President is pleased to appoint (i) Shri Sanjay Kumar Medhi and (ii) Shri Nani Tagia, to be Additional Judges of the Gauhati High Court, in that order of seniority, for a period of two years with effect from the date they assume charge of their respective offices.”

According to a report published on Saturday by ‘Bar & Bench’, their names were recommended for elevation by the Supreme Court Collegium in April this year. 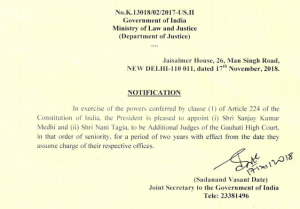 Their addition would take the working strength of the High Court to 19, as against a sanctioned strength of 24, it added.

Through another notification, the Government of India also appointed additional Judges in Madras High Court.

As per the notification, B Pugalendhi, who has previously served as an Additional Advocate General for Tamil Nadu, has been appointed as an additional judge of the Madras High Court.

With this appointment, the working strength of the Madras High Court rises to 60 against the sanctioned strength of 75 judges. This is including the name of Justice Vineet Kothari, whose transfer to the High Court was notified recently, although he is yet to assume charge of his office, the report stated.

Meanwhile, the Government of India through a notification issued on Saturday, also appointed senior advocate Hamarsan Singh Thangkhiew as a new Judge of the Meghalaya High Court with effect from the date he assumes charge of his office.